I'm waiting for glue to dry before I can work on the next motif in the Tudor Embroidery class.

The glue is to keep the velvet that will be appliquéd to the wool mounted on the slate frame from fraying when it's cut. I have the patterns ready to go and the silk cords made. I've even pricked and pounced and transferred the design: 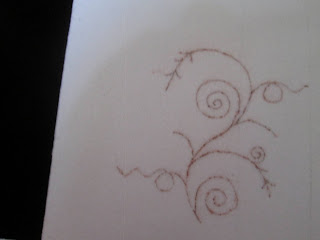 I just have to wait for the glue to dry.

The original plan was to glue the velvet yesterday so it could dry overnight. That would have worked if I could have found a brush.

There should be a number of brushes floating around this house. We always had art supplies on hand when the kids were growing up, and, as we have found as we work on downsizing, apparently we never get rid of anything we might need in the future (children of Depression/WWII era parents tend to hang on to things--or go the opposite and get rid of everything).  I do remember having a major clear-out of broken crayons and dried up bottles of paint. It is possible that the paint brushes we had left were in no condition to be reused and went with them.

So, since Dearly Beloved was going on a grocery run, I sent him to pick up a paintbrush or two, which he did. But, by the time he got home, there were other things going on and I didn't get to spread glue on the velvet.

So I'm waiting for glue to dry.

Meanwhile,  I can start the next "ribbon" on the Stitcher's Envelope. There will be two, next to each other, with the fold line between them. The first is done. 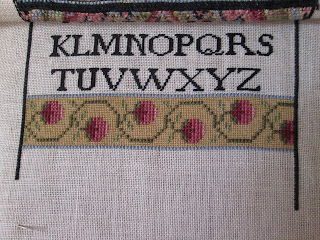 And seeing the next one develop is going to be just about as much fun as waiting for glue to dry.