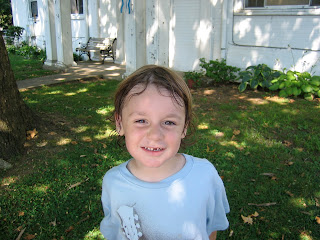 This scruffy, snaggle-toothed urchin is the light of my life.

We went to visit him this week-end and had a lovely time. He introduced me to Pingu while we babysat. We read "Going on a Bear Hunt." We had some delightful discussions about various topics of interest to a person of three years of age.

(I had to take a nap yesterday, and I never take naps!)

Never took a stitch and, quite frankly, didn't miss it. Enjoying the munchkin took precedence.

Happy Dance--the darning pattern for the scissors case is done! 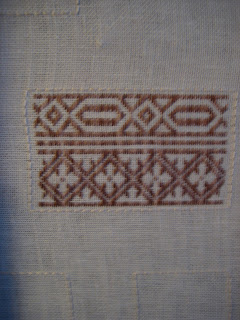 I love the way that darning patterns look, but it doesn't take more than one repetition and my Stitcher's ADD kicks in. I came very, very close to going on to another section, but there is one thing I've learned about my stitching habits.  If I leave something for any length of time--and that can be only 30 seconds--the project tends to end up in a bin, lost and forlorn, waiting for me to return.

And that's why I try to do all the outlining and borders and repetitive parts at the very beginning.  If I don't, it may never get done.

By the way, here's the other bits I've managed to do this week. 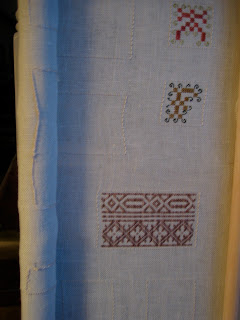 Yes, I am working sideways on the scroll bars. Stretcher bars were going to be too long to handle easily.

And it amuses Dearly Beloved.
Posted by Ann at 4:47 PM 3 comments:

Yesterday was our anniversary.

We both had to work. We also wanted to take advantage of the hours of one of the local farmers' markets, which opens from 6:30 - 8:30 in the evening on Tuesdays.  At this market, there is a local caterer who brings prepared food-to-go, and he has wonderful things. So we decided, rather than going out to dinner, we'd pick up some produce, grab a to-go thing from the caterer, and celebrate our anniversary with a quiet evening at home.

It was hot. Hot, hot, hot. I was dressed for work, and I work in an area of the office that could also be used as a meat locker.  I was melting.

We did find corn and green beans and squash and cucumbers.

We hit up the caterer and found that he didn't have the promised gazpacho but did have chicken cacciatore--with a label on the top that gave heating directions: 15- 20 minutes.  We grabbed and went.


So we ate the corn and the cucumbers and left the chicken in the oven for another hour, which served to thaw it out and heat it up. It was very good and well worth the wait.

And we decided it was a metaphor for our marriage.  We eventually get to where we're going, but we tend to go on detours on the way.

Meanwhile, on the stitching front, I'm working on the darning pattern for the front of the scissors case.  it is very pretty.  It is a wee bit on the boring side to stitch.  I may have to work on another section and go back to this later.

No pictures tonight--dead battery in the camera.  When it's recharged, I'll show and tell.

It hit me today--for no apparent reason--that six months from this date I reach a milestone birthday.

And tomorrow is Dearly Beloved's and my thirty-sixth wedding anniversary. For those who said it wouldn't last, well, we're still here. Probably crankier than ever, but still here.

I don't set goals or make resolutions because the very minute I do, something comes along that makes it impossible to do what I set out to do.  It is likely my own contrariness, but it happens.

However, I think I'm going to see if I can get rid of some things that have been weighing me down in the next six months.  It's time to start going through this accumulation of Stuff and Nonsense. I want to downsize, keeping those things which I believe to be useful and know to be beautiful.

Obviously, this does not include needlework of any sort.

But Dearly Beloved had better get a haircut soon or he's going to be out of the beautiful category.
Posted by Ann at 2:37 PM 3 comments:

A little bit of color

Outlining on the Betsy Morgan casket is done--and the button bag design is stitched. 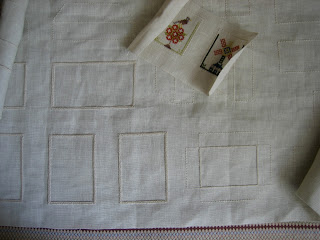 Now I need to iron the linen and sew it to the scroll bars and get on with the fun stuff!  It's a perfect way to spend a Sunday afternoon.

Dearly Beloved is also enjoying a quiet Father's Day.  We are going to visit The Flash and his parents next week-end . . .I think Dearly Beloved is marshaling his reserves in anticipation.
Posted by Ann at 10:33 AM 1 comment: 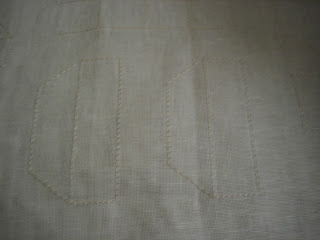 Maybe this is a little more visible. 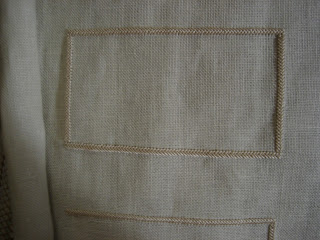 At the moment, I am working on the outlines for the pieces that will eventually make Betsy Morgan's design for a casket and smalls. Miles and miles of outlines. Hundreds and hundreds of threads that must be counted accurately.  All the bits and pieces have to be oriented and stitched correctly so that they will fit together when the project reaches the finishing stage.

So, at the moment, there is nothing colorful or particularly interesting to show.   Hopefully all the bits and pieces will fit on the linen as they should and I can get to the fun parts soon!
Posted by Ann at 5:45 PM 3 comments:

Yesterday was an absolutely lovely day.

I drove up to Baby Girl's abode on Friday afternoon after work, then yesterday, we hopped in the car and took off to meet some new stitching friends who are organizing a new sampler guild in the Greensboro, NC area.  Chris of Tot Hill Farm fame had invited me to join them for a tour of Blandwood, an historic house museum in Greensboro, and lunch, and a trip to the Greensboro History Museum.

And it was SO  much fun!

Baby Girl had a double major in linguistics and history, so she is always ready for historic properties and museums.  I love old houses and museums. Blandwood was fabulous, an Italianate house built onto a Southern farmhouse--with beautiful Victorian furniture and accessories in the style that would have fit the house (some family pieces, others age-appropriate to the house).  I wish we had had more time to examine some of the furnishings, especially the exquisitely embroidered table linens!

We had lunch with the group and really enjoyed getting to know the people we hadn't met before.  I've yet to meet a group of stitchers that weren't delightful people, and this group is among the most delightful. After lunch, several of us strolled to the history museum and enjoyed meandering around the exhibits.  This is on my list of places to visit again.

Baby Girl and I regretfully left and headed back to her home.  On the way, we decided we may both just have to become members ASAP--the guild meets on Saturdays every other month.  What a good excuse to have a girls' week-end!

Once back, I stitched a few stitches, we decided to go to a movie, we went, we had a late supper, and collapsed into bed.

Then I had to come home. Back to the mountain of laundry.

Dearly Beloved has been playing with the new washing machine. He has figured it out and has done several loads of laundry with it.  Now that he's had that experience, he may not want to ever have it again.  Which means that it is now my turn to read the manual and do a few loads of laundry.  And probably many more . . .
Posted by Ann at 11:00 AM 1 comment:

There has been no stitching the last few days.

The old one was only 20 or so years old.  Apparently that is 105 in appliance years.  In all that time it has had only three service calls, one of which was this last one when the repairman pronounced it gone.

But I must say, disposing of income on needlework is much more entertaining and enjoyable than spending it on appliances.
Posted by Ann at 2:56 PM 2 comments:

At last!  The final double running bands on Mary Atwood are done!!! 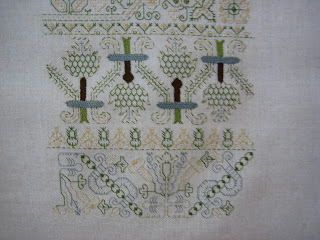 And this is most of her thus far: 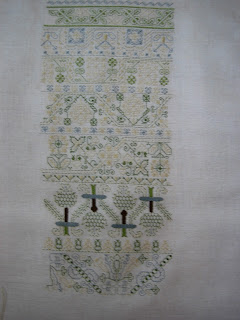 Once again, I had to wonder about some of Mary's decisions. Again, she stitched over one color with another in a couple of places, and there are a couple of omissions of stitches or patterns.

But my working of these patterns has amused Dearly Beloved to no end.

The last band had three colors.  This meant nine charts.

My stitching corner is quite cozy (i.e. I sit in the corner without a lot of extra room when you consider the frame holder, the lamps, the end table, the pile of stitching on one side and the books and magazines on the other).  Juggling scroll frame and three oversized charts--plus the master chart showing the relationship of one band to another--and the threads, and the scissors, and my Pepsi--well, apparently I could join Cirque du Soleil as a contortionist.

If he mentions this one more time, I may be joining the prison population instead because I will clobber him.

Actually, the only thing that may save his life is the fact that I would not have access to sharp embroidery scissors in prison.
Posted by Ann at 11:52 AM 2 comments: