I Know my ABC's

I haven't worked on a sampler since I went to the retreat in February, so I decided to pull Frances Burwell out of her pillowcase.

And then I remembered why I hadn't worked on this since. 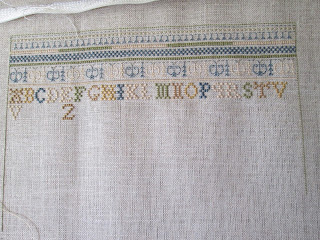 I don't like stitching numbers any more than I like to stitch letters, but I will struggle through so I can get to the fun stuff.

And if this is the worst struggle I have to overcome, I lead a charmed life.
Posted by Ann at 7:05 AM 2 comments:

Black and (off) White

So I sat down yesterday after a morning of errands and picked up the prework for the class I'm taking from Betsy Morgan at Salty Yarns in a couple of weeks. 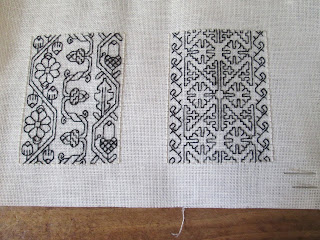 If working out the double running patterns doesn't create new neural pathways and help to stave off dementia and Alzheimer's, I don't know what will! I'm still getting over the brain cramps.

And I don't have a clue what I'm in the mood to work on next. There are more than enough projects in the stash to keep me busy until I'm 462, but I can't decide which one is the most enticing.

Back to closing my eyes and grabbing whatever is in the basket by the chair, I guess.
Posted by Ann at 8:26 AM 3 comments: 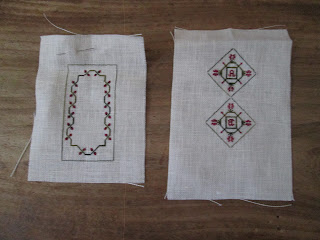 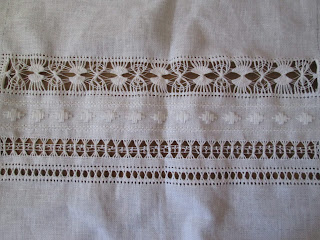 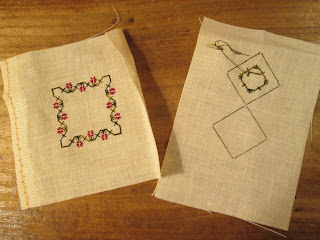 The work project is also almost stitched.  Just the large motif in the center is left to do. 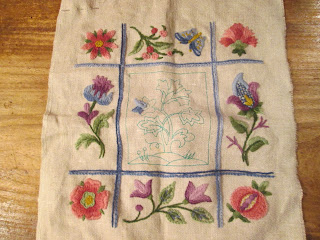 And this means I need to decide what to do next. I already have an idea about the next crewel piece for my lunchtime project--but I'm not sure which way to go with my everyday project . . .

I'm in the mood to plunge back into the 17th century. But I've been thinking about samplers, too. And how can I stop working on the stitching toys I love so much?

There's only one thing to do.

I need to clone myself.
Posted by Ann at 4:38 PM No comments:

While I've been babysitting waiting on Dearly Beloved hand and foot assisting Dearly Beloved with his recuperation and recovery, I needed something I could stitch that was fairly small, easy to pick up and put down, and had a rhythmic, repetitive pattern so I wouldn't have to think about it.

So I rummaged in the Big Tote Bag of Small Projects and pulled this out: 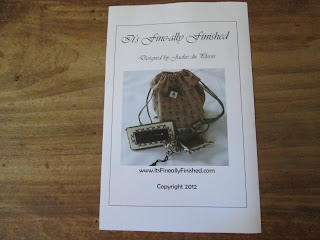 So far, I've finished the band that will fit around the base of the bag. 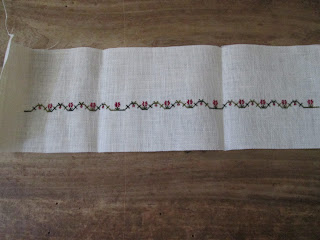 And I've started the little tray. 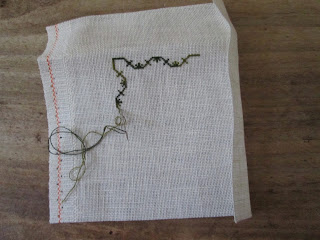 There are two more pieces to stitch for this set, and I'll have something else in the finishing pile.

Which I most definitely will not tackle until Dearly Beloved is healthy again.
Posted by Ann at 2:29 PM 1 comment:

I have not fallen off the face of the earth or decided to stop blogging. I just haven't stitched much lately, and certainly nothing worth showing.

Instead, I've been playing Florence Nightingale. Dearly Beloved had to have a "procedure."  He refers to it as being sliced-and-diced. Needless to say, the only stitches of any interest around here have been his.

I'll be back when we're closer to what passes for normal around here.
Posted by Ann at 7:35 AM 1 comment:

I got something finish-finished last night. 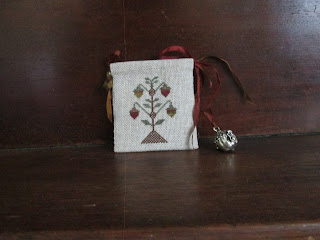 I hadn't planned to.

Somehow when I was taking it out of its little bag for blog photography, I caught a loose thread and the banding raveled. Past the point that it needed to be trimmed. Pretty much past the point of no return.

There was panic and foul language.

For a nano-second, I thought about reweaving the threads.

So I pulled out some iron-on interfacing, measured and cut it to the size it needed to be, and pressed it to the back of the banding.

As long as you have the cutting board and rotary cutter and iron out, you may as well measure, cut, and press the interfacing for the lining for the little pouch.

As long as the ribbon tunnels are sewn, you may as well fold the band and sew the side seams.

As long as the side seams are sewn, you may as well insert the ribbons and tie bows.

As long as the ribbons are inserted and the bows sewn, you may as well loop the charm to the ribbons.

And you have just gone through a finishing frenzy and have a finished project.

(It still needs the ends of the ribbons touched with Fray-Stop and the charm needs a touch of silver polish, but I'm calling it done.)
Posted by Ann at 3:09 PM 2 comments:

I think I have that backwards--but this little project is now embroidered. 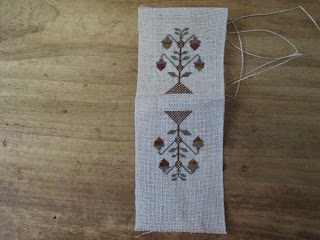 I didn't think it would take as long as it did, but I didn't have as much time to stitch the last half of the week as I had thought I would. Besides, I am firmly convinced (even though I've never run time trials) that working over one takes longer than working over two, and that crossing each stitch as you work takes a lot longer than zooming across the row one way and zooming back the other.

And then I started on another little project: 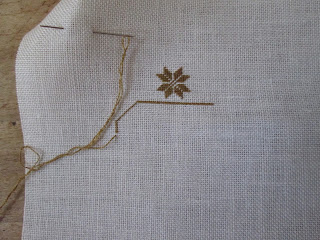 This is Mary's Token of Affection from Gentle Pursuits Designs.  It will make a sweet little needlebook eventually. It's also supposed to be cross stitch over one, but I tried that and decided, at this linen count, the stitches looked crowded. So I made an executive decision and I'm working it in tent over one. I'm much happier with the way it looks.

And then I decided that Isabella, the Group Correspondence Course my local EGA chapter is doing, would be my Sunday project. And this is where it is now: 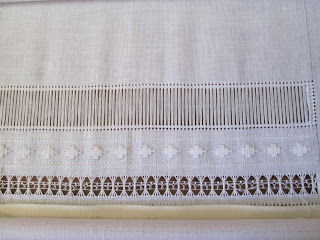 I'm finally to the point I can do a pretty complicated knotting pattern, followed by some needleweaving. I think that's going to require more resources than I can muster this late in the afternoon, so that will be next Sunday's project.

I realize that all of these small projects I've been doing are, at some point, going to have to be put together. I think I'm going to do another one or two, then go into a frenzy of finishing--and with my finishing skills, I will be frenzied--and get them all done at once.

Then I can let myself start to play with some new goodies that have arrived in the mail of late--I have Eleanor of Aquitaine from Gay Ann Rogers, several Jackie du Plessis projects from SNS and Needle in a Haystack (I don't think Jackie ever sleeps), and another sampler. Oh, and a crewel kit I've wanted since 1976 and finally found online--it's not here yet, but it's supposed to be on its way.

So I went rummaging in the Big Bag of Small Projects, where I keep my mini bars.

I came up with several small pieces that I had started, but for some reason, lost in the mists of time, I didn't finish.

This one needed about four leaves stitched. So I stitched them. 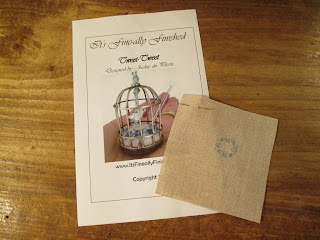 This one needed to have the tops of the thistles added. So I added them. 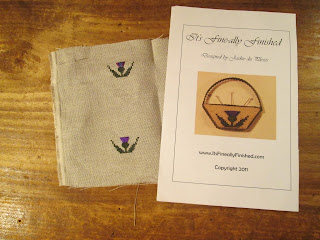 This one needed way more than the other two, but I'm going to work on it tonight. 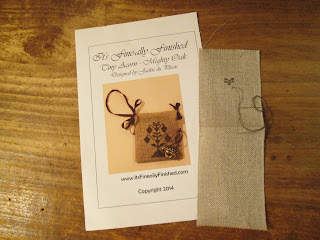 And I never did find the stretcher bars. I forgot to look for them.
Posted by Ann at 4:42 PM 2 comments: