Do you see the bird next to this knot-thing on Martha Edlin? 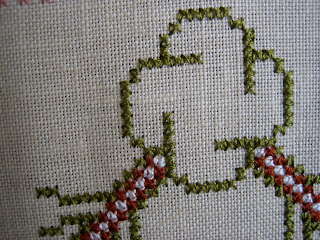 No, of course you don't.

Mainly because he is no longer there.

First he perched a thread too far to the left.  So, out he came.

Next he lit a thread too high.  He was picked out again.

Third time may be the charm but at that point I didn't want to try again.  So I started a new/old project. 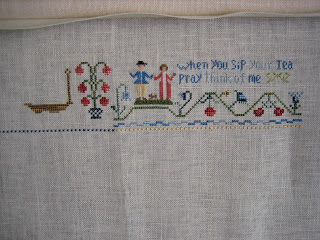 This is the first basket band for Barbara Jackson's Tea Time Basket.  I was a ghost for the class awhile ago, then had a chance to audit it through Shining Needle Society.

I am thoroughly enjoying this project. I love the color palette (and color is the thing that always pulls me to or forces me away from a project), it has a nice variety of stitches, and it's nice to have a project in which you can actually see some progress after an hour or so of stitching.  I think it may get more than one three-day cycle in my stitching plan, just because it's so stinkin' cute! I mean, just look as this happy couple: 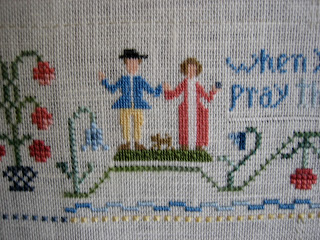 So on this beautiful fall day, I'm going to do as little housekeeping as I can get away with, take a walk, and settle down to stitching.  I do love Saturdays! 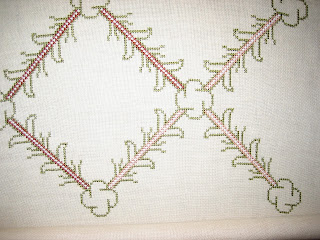 Slow and steady wins the race

Or gets the filling on Remember Me finally finished: Of course, this reflects the limit of my ability to concentrate this week.

A little over a week ago, the Big Kid was involved in a traffic accident with a drunk driver, who not only hit him hard enough to spin him around but also had her ten-year-old child in the car with her. He is OK--or as he put it, both eyes are looking in the same direction and all his insides are still inside and in the correct places. He does start PT this week for his back and knees, and his car is totaled. However, he was alone in the car so Wife and The Flash were not injured.

I have to admit, I am still vibrating a little.

Thus proving that motherhood is indeed a terminal condition. You recover when you die.
Posted by Ann at 8:39 PM 2 comments:

There will be no picture on this blog because there has been no significant progress made on any needlework since the last posting.

Instead of needlework, I spent a good chunk of the week-end digging in one corner of our junk . . . uh . . . storage room. It was originally going to be my sewing room but then it turned into a room where everything we didn't know what else to do with was put. My dead sewing machine is still on the other side of the room and getting to it has turned into a full-on obstacle course. As I am large and lovely and no longer capable of hippity-hopping over impediments, something had to be done. So I started at the corner closest to the door and I am happy to say that the back of my car is currently full of items that will be donated this week.

I have barely made a dent.

We have lived here for 20 years and, from the looks of things, we have never disposed of anything in all those 20 years.  As we have been talking about downsizing--or at least moving to something on one floor since neither of us has knees that need to go up and down stairs--it is time to spend some time determining if these treasures we've held onto are really treasures.