So, I decided to do something other than letters for the Fourth, and this is what I came up with: 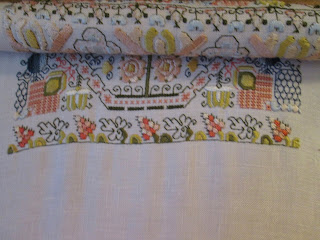 Hannah Thornbush now has pineapples filled in. Personally, I've never seen pineapples that were coral and salmon in color, but then I don't live in the 17th century where I may not have seen an actual pineapple.

Which may mean why the pomegranate I'm stitching for the Tudor Embroidery class is not red, but gold and blue. Earlier century, but same reasoning. And speaking of that, I've found I need to work on that project when I first get up in the morning and my brain is still fresh.

My brain was not fresh this morning. We had a quiet Fourth of July. Some of our neighbors did not. They were still reproducing the rocket's red glare and bombs bursting in air at midnight--and then, apparently, discovered they had more fireworks at 4 a.m. and set them off then. It was not a restful night.

Since I was in a less than optimal mood this morning, I did not work on my pomegranate. I finished the alphabet for the Stitcher's Envelope. 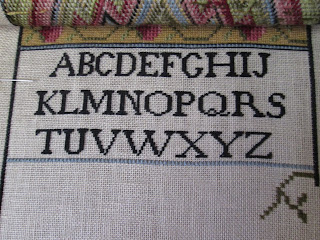 After the alphabet, the patterns are repeated on both the envelope and the accessory pieces. Because of that, I'll definitely rotate this with Hannah and some more finish-finishing after I finish my Tudor stitching for the day.

And hope nobody sets off any fireworks tonight.