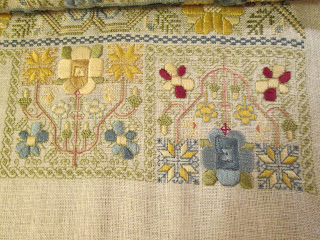 And I don't have to use a sharp needle for the rest of the sampler. 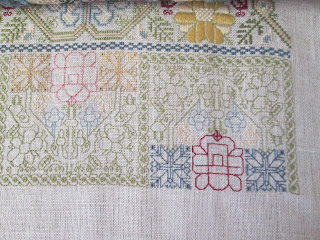 After struggling for a solid week with the double running on the first chamber, I breezed through the second chamber in a single day!

I am totally amazed with this.

Or maybe fish really is brain food, like my third grade teacher told us when there was a widespread revolution about eating fish sticks in the school cafeteria.

Although I think the sushi, sashimi, and nigiri in Special Lunch B at our favorite Japanese restaurant  yesterday were a far cry from those fish sticks so very long ago.

For the last week, this has been kicking my amply cushioned posterior. 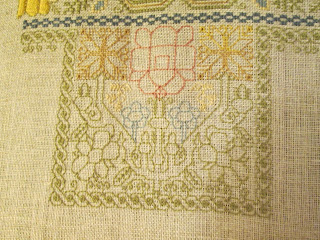 The directions are extremely good, with every detail clearly written. The chart is large and easy to read. There is even an enlarged photocopy of the completed reproduction.

So, I read the directions for each section. I count from the chart. I look at the color photocopy. I look back at the chart because by then I've forgotten how many stitches I'm supposed to take. Then I take a stitch.

I used to think that figuring out double running stitch patterns created new neural pathways and helped stave off impending doom.  Now I'm beginning to think it's having the opposite effect.

And I have another chamber to outline.

Do I fill in the satin stitch on this chamber before I do the double running on the second chamber, or will that just prolong the agony?

I'm going to sleep on it. 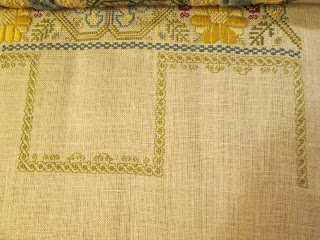 I'd hoped to be just a little farther along on Frances Burwell this week, but I spent some time taking out stitches that had been very carefully stitched in. There were two lines of backstitching, one on each side of the sampler. On the original, the sampler had a rolled hem that was folded to the backstitched line--something that I hadn't noticed on the original when I visited her in the textile display at Williamsburg's DeWitt Wallace Museum.  I will be looking for it the next time I have a chance to see her.

Anyway, those backstitched lines ran right through parts of the patterned bands. The more I looked at them, the less I liked them. They were downright intrusive.

The only thing I can figure is that the original owners wanted to fold the sample so it would fit into a specific frame. I don't have to worry about that.

You will remember that I don't change things very often. I work reproductions as closely as I can to the original, given the changes in linens and threads. I work reversibly if the original embroiderer stitched the sampler reversibly even when I could finish the project in half the time if I just did plain old cross stitch. Yes, it's a little OCD, but I'm a first born girl child and we tend to be perfectionists and rule followers, except when we're not.

So I've decided I'm now stitching an adaptation rather than a reproduction.

After all, if I start to feel guilty about not being as exact as possible, I can always put them back in.

*apologies to Aretha
Posted by Ann at 6:42 PM 5 comments: 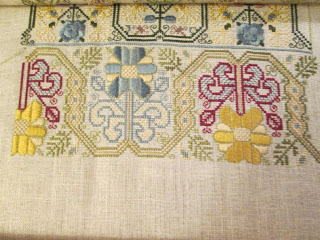 It was not without travail. I had to resort to a sharp needle to do the satin stitch for decent coverage. There is no DNA left on the sampler, but I did leave some on other surfaces during this process.

Alas, there will be no stitching tonight--or anything else that involves close attention to visual detail.  My annual eye appointment was today. My pupils are still dilated and the world is slightly fuzzy. About all I can do is blankly stare at the TV across the room (and I'm not so sure I'm typing anything that makes sense).

Is it a sign of true obsession that while I sat in the chair waiting for my eyes to dilate I tried to figure out the best way to handle the reversible cross on the small dividing band that comes next?  And is it a little sad that I'm a little sad that I can't see if what I figured out will really work?  And should I be concerned that I might forget what I figured out by the time I can see again, due to my rapidly advancing age?

I had to hand over my Medicare card and I'm still feeling the sting of having one.
Posted by Ann at 5:23 PM 3 comments:

Hope everyone is enjoying the Fourth in the way that makes you happy!

I am following my traditional Fourth. I am inside, in the AC, watching a documentary on The Revolution, and stitching.

And, as of today, this is where I am on Frances Burwell: 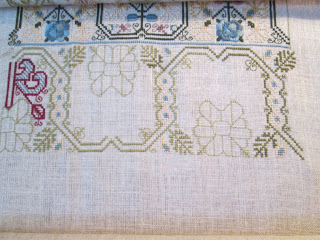 I was going to work each chamber completely before going on to the next, but I discovered last night that it was very, very difficult to see the pale green silk thread against the cream-colored linen under artificial light. So, my goal today was to get the outlines for the big flowers stitched while I had daylight.

I did--but it wasn't easy. We've had cloudy skies off and on.  And, of course, the minute I finished off the last thread, the clouds dissipated and the sun is shining brightly.

I believe I'll stitch a little cream thread onto the cream linen while I can.
Posted by Ann at 12:31 PM 2 comments: