While I was out-of-whack this week, good things arrived on the doorstep. This is one of them: 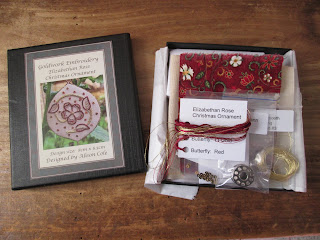 Alison Cole has been designing annual Christmas ornaments for awhile, and I have a number of them in my stash. But this year, by golly, I plan to get this one stitched and on the tree.

I figure that after getting two projects assembled in one week, I can start something new.

Actually, I do not need a reason to start something new. You may have noticed.

Finished and Done In

Age and decrepitude did me in this week. I threw my back out--again--so it has not been the most productive time since I couldn't sit or stand comfortably. So I took a pill and went to bed until the muscles unkinked.

Barely was I able to totter again when Dearly Beloved dragged me off to get my flu shot, and I had a relatively mild reaction--about six hours of chills and a low grade fever--but it also interfered with holding a needle in my hand.

However, I was finally able to do a wee bit of finishing and the Tasmanian Needle Tidy is assembled. 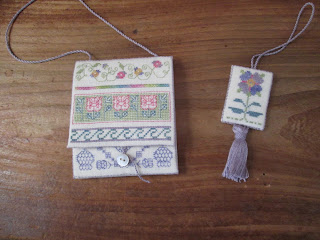 Here's the outside with the fob  Betsy Morgan has a signature fob finish, which includes a luxurious tassel. My tassel looks scraggly, and I think it's going to be reworked. Or maybe left off completely. Sometimes tassels get in the way. 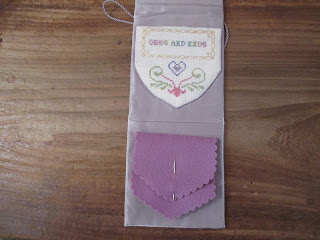 Here's the inside. I do love the pocket that says "Odds and Ends." It's just the right size for a pack of needles and a small pair of scissors.
As soon as I decide what to do with that tassel on the fob.

So I got the double-running framework for my next band on the Tudor Band sampler finished yesterday. There are now acorns floating in mid-air as well. There are more double-running stems that extend from the acorns, so it made sense to get the acorns in place. Once I get those stems stitched in, then it will make the placement for leaves and flowers easier.

At least, that's the plan! 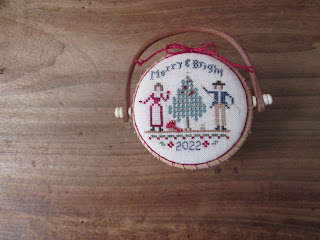 The lid is weighted so it won't fall off in the most ingenious way--and it was all very easy to put together.

And then, one of my Christmas presents arrived. Getting packages from The Crewel Work Company is always like Christmas anyway. I did have to go ahead and open it, and I'm not sure if I can wait until Christmas to start--but I think that's going to depend on whether or not I have a free slate frame. I may have to finish something in order to do that. Once you have something mounted on a slate frame, you absolutely do not want to remove it. 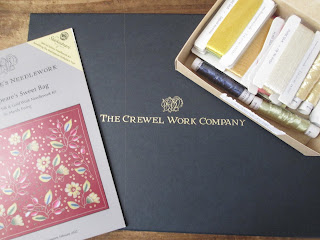 I'm not sure what I'm going to tackle this afternoon. I need to do some work on the online classes I'm taking, and I still have finishing to do, and there are lots of goodies in my corner of the living room to choose from. I may just close my eyes and grab!
Posted by Ann at 8:09 AM 4 comments:

This has been one of those weeks when what I wanted to do didn't happen because life got in the way. I think things have calmed down again (famous last words) and I'll be back to my regular rut.

I have barely threaded a needle in what feels like eons. I had the idea that I would stitch non-stop once I retired. That has yet to happen. I hold out hope that it will.

The beginning of the next band on the Tudor Band Sampler: 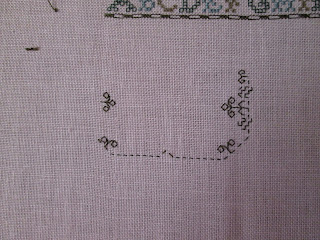 And the beginning of another band on the Whitework Delight Sampler: 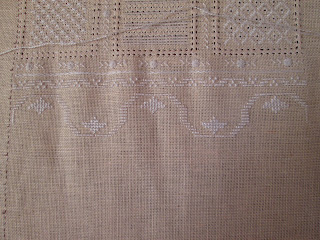 It has been brought to my attention that I tend to be very cranky when I don't stitch regularly. Since the person who brought this to my attention is the one who has interfered with my stitching time, he may be getting what he deserves. We're going to work on that this week. 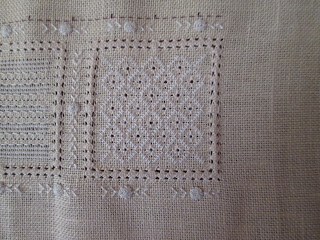 So last night I decided that it's Whitework Delight's turn with my needle, and I finished the center block and got a good start on the third. 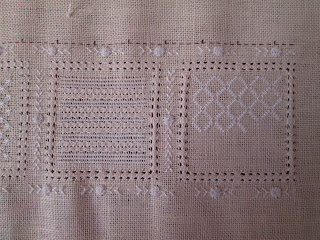 I love the pattern on the center block. It looks like the lacy edges on Victorian ladies' unmentionables--just think of all that loveliness hidden under yards of fabric and bustles and high collars.

Today I'm going to finish working on last week's lessons from the online class I'm taking in stumpwork so I'll be ready for  tomorrow's session. Actually, I should have already had a class this morning in goldwork from the same tutor--however, because of the time difference, I would have had to get up shortly after 4 a.m. to be ready for the class at 5 a.m.

I tried. I set the clock. It appears that I turned it off and went back to sleep instead. Luckily, everything is taped so it can be viewed and reviewed later. I may take that route, although I would like to participate in the live classes. We'll see. . .

I do have to say that the tutor, Sara Rickard, is a phenomenally good teacher. She takes the time to go into detail on everything we're studying and provides the reasons. I've taken workshops in goldwork in the past, but at the most, we had two to four days with a lot packed into them. These two classes will run for three terms--almost a year--of weekly sessions, and I think I'm finally going to have the skill set I want.

And now, for today's rant, which has nothing to do with needlework.

We have been invaded, once again, by the most despicable, abhorrent, nasty, hateful, disgusting poop-machines on God's green earth.

The Canada geese are back.

My morning and afternoon strolls have become a battle with an obstacle course, both due to the geese themselves and what they leave in their wake. I have had them hiss and flap at me, in what appears to be a hostile overture.

But that's OK. I have been known to hiss and flap back.

I didn't plan to become the crazy old lady in the neighborhood, but if it makes the geese move out, I'll be happy to provide that service.

Barbara posted another lesson on Merry and Bright, so I got the beading and garland stitched. 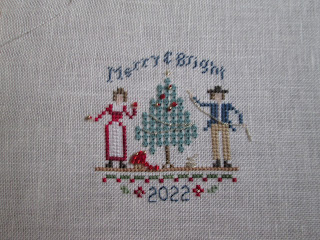 BDE wanted to know what the "stuff" under the tree is, since she couldn't quite make it out. The little lady is next to a box of ornaments that seem to be overflowing (which sounds like what happens at our house during the decking of the tree). The little gentleman has the coil of garland at his feet.

I think maybe the next lesson will talk about how to mount the piece to make the lid of the basket. And then it will be ready for Christmas.

Somebody said earlier today that it is 11 weeks or 77 days to Christmas--which got me thinking about Christmas stitching. I am not a big seasonal stitcher, but I do like to do Christmas projects--so I'm thinking about going that route the rest of the year.

Or not. Dearly Beloved is still complaining about the finishing basket. And there are other things still calling my name.

I need to be at least three people.

How do I love thee

I do not think I've ever mentioned how much I adore working with Soie de Paris.

I love this thread, better than any other silk I've ever tried. Actually, after stitching with SdP, even Soie d'Alger seems coarse. SdP simply glides through the linen, and the sheen is incredible.

And what brings this to mind is that I finished the major alphabet band on the Tudor Band Sampler, and it is stitched in SdP, and even though it's an alphabet and I really do not enjoy stitching letters, it was not a pain to do. I'm not going to say it was a delight, because they are still letters, but it was not a pain. 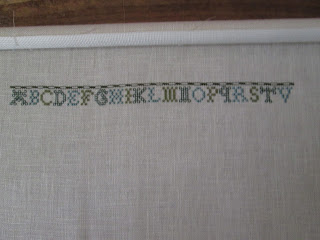 Today, though, I need to work on the two online classes I'm currently taking so I'll be sure to be ready for early Monday morning and again on Tuesday afternoon.

And somehow, there is laundry to do. There are only two people living in this household, and the laundry still seems to breed and multiply.

I had a stitch-filled day yesterday.

During my EGA chapter's weekly stitch-in, I added foliage to the big pin cushion that will line the top of the box for Jackie's Dear Heart. 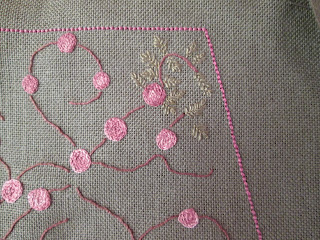 I've decided this is the perfect stitch-in project.  It's basically free-form--we don't have specific directions for each spray other than a placement diagram. Consequently, it's easy to do while talking and laughing.
After I came home, I photocopied the Tasmanian Needle Tidy and made the templates for the interlinings. 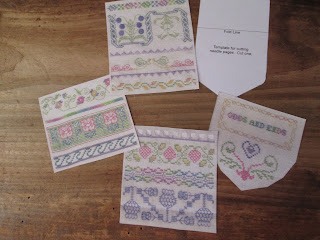 Then I started the alphabet row on Tricia Nguyen's Tudor Band Sampler. 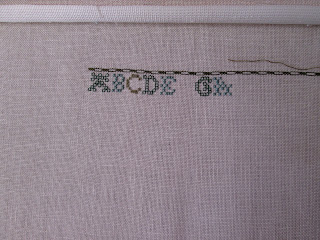 This band alternates three different stitches for the letters: four-sided stitch, Smyrna crosses, and eyelets. I was a bit concerned about the eyelets, since I have not had luck in the past with doing them over two threads.  However, after all these years, I realized if I worked all the stitches worked on the diagonal first, then worked the vertical and horizontal stitches, I didn't lose those vertical and horizontal stitches behind the threads of the linen. Well, duh, why that hadn't occurred to me before is a mystery.
And then I went to our Carolina Sampler Guild meeting to round out the day.
Pretty much a perfect stitching day!

I did get Merry and Bright stitched in a day! 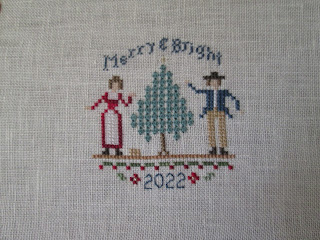 I do need to add the beads and "garland" but I thought I would wait until the actual lesson is posted to see if Barbara has suggestions on attaching them. Yes, this is an online class, and, yes, I jumped the gun and started early.

So what will I do today? Actually, this is going to have be a Domestic Diva Day. The clutter is threatening to bury us and it must be dealt with. After all, it is a new month!