When you finally get this stitched: 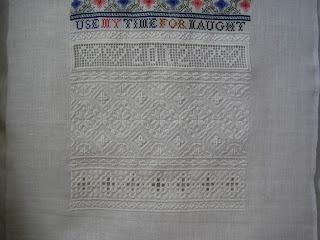 It means you have finished this: 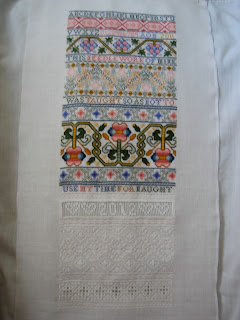 So now I have to decide what to play with next. Mary Atwood may be next.
Posted by Ann at 1:38 PM 5 comments: 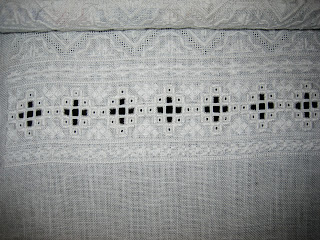 Now the hardanger band is done.

More or less.  I see a few fuzzies in the picture that the cyborg eyes missed.  After they're trimmed, I scroll back and start the lacis band.  Since so many threads are withdrawn in that band, I prefer to wait until the last to do it--the more threads withdrawn, the floppier the linen becomes.

And there is a three-day week-end fast approaching.  There are many tasks about the house that will be done--NOT!  I'm going to play with needles all week-end.
Posted by Ann at 6:11 PM 1 comment:

I'm working on the Hardanger band of Time Well Spent. 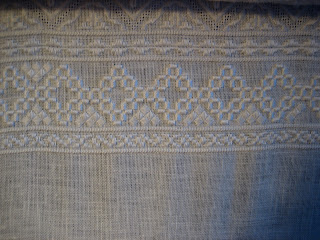 It always seems to take forever to do Kloster blocks.

Except I haven't. Baby Girl came home so that Dearly Beloved could take her car in for an inspection and any necessary work (which resulted in Dearly Beloved buying her four new tires).  She and I went to the farmers' market on Saturday morning, had lunch at our favorite Japanese restaurant, and went to see Dark Shadows. We both wanted to see it--she because of the trailers and I because I loved the original soap opera years and years ago.

About Dark Shadows, I will say this. I will never recover those 113 minutes.  If given options, I would suggest taking the money and going to see The Avengers, even if you've already seen it.  Even if you have already seen it three times.

Actually, my marathon in the dentist's chair on Thursday afternoon was more pleasant, even though it lasted over twice as long as Dark Shadows.
Posted by Ann at 5:27 PM 3 comments:

Sleepless in the Southland

I can handle anything if I have enough sleep.

However, the last couple of weeks have been . . . interesting . . .in terms of getting all the sleep I want.

First, there is The Bird.

Apparently there is a bird who acts as rooster for all the other birds. It starts twittering and tweeting all by itself before the first touch of light.  Then, the next thing you know, other birds start singing  and carrying on.

In the early spring it's lovely to wake to birdsong. However, as the days have started to lengthen, The Bird has started its wake-up calls even earlier.

Then we have our newspaper carrier.

Actually, I am delighted with him, since our newspaper ALWAYS lands on our stoop. I don't have to traipse about in the dewy grass searching for it. However, he hurls the paper at the stoop from his car. Occasionally it hits the front door with a THWACK that jolts me into an upright and wide awake position, since my bedroom window is over the front door.

And then we have the new neighbors.

A couple of weeks ago, a multigenerational family moved in, and it appears that the grandfather and father work together. Whatever they do requires them to leave at about 4 a.m.

Generally they have a fairly quiet conversation, just the barest rumble of bass voices rising from the street. And there is the car starting and the car doors closing, which at 4 a.m., are much louder than they would be at 4 p.m.  But still, not a problem.

Then there was this morning, the perfect storm.

The Bird started up at 3:30 a.m. and was apparently perched in the holly bush by the front door.  And this morning, he was determined to wake EVERYONE up.  In moments there was a maelstrom of birdcalls.

And then the newspaper carrier hit the front door with such a mighty THWACK that the paper ricocheted off the door and clanged into the metal railing around the stoop. It sounded like the entire pot cupboard avalanched.

This did not shut up The Bird.

Just as I was about to drift off again, Grandfather and Father came out to go to work, and things were not going well in their world.  They were having an argument, at the tops of their respective lungs.  I'd love to tell you what the argument was all about, but they were not speaking English--or Spanish--or French--or German--or Latin, which are the languages I can identify.  They continued to yell while they entered the car and the driver laid rubber leaving their driveway.

At this point, I gave up on the idea of sleeping, which would have come in handy today since I had another marathon session in the dentist's chair.

However, as this is a stitching blog, there has been some stitching going on: 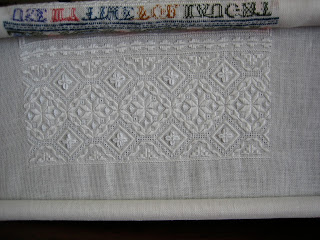 Here's the completed whitework band I showed you earlier.  I have another couple of small bands and a hardanger band to stitch at the bottom of the sampler, then I need to go back and do the lacis band above this one.  The end is near!

Sittin' with The Flash

Actually, there is very little sitting with The Flash around.

Dearly Beloved and I just fell in the door after spending the week-end with The Flash (aka our three-year-old grandson).  There is no stitching to report because, although I always take a project with me, there was no stitching done this week-end.

We did visit a festival in one of the state parks with The Flash and his parents and had a lovely time. Then we took The Flash home so the Parents could have a date night.

It has been decades--DECADES--since I had to bathe a wiggly little person, as well as handle tooth-brushing and pajama-putting-on and bedtime-story-telling.  However, The Flash was very helpful. letting me know when each step of the bedtime ritual should occur and when I was doing something incorrectly.  He was also very helpful in showing me how to turn off the music box in his toothbrush. Otherwise, we may all have gone slightly bonkers from the Thomas the Train Engine song.

And now I'm going to see if I can thread a needle and do a bit of embroidery before I fall asleep.

Quite possibly with said needle in my hand.

A Little Bit (a very little bit) of Whitework

Here is part of the whitework for Time Well Spent. (I have no idea what is casting the shadow. It is a shadow, the linen is not brown.) 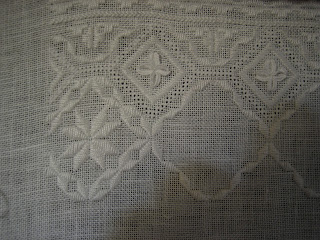 Do you find there's a theme here?

I am SO CLOSE to finishing this sampler.

Do you find that you get really excited about a project when you come close to the end, and you want to stitch on it constantly until it's done, over,  finis?


Or do you find that you stitch more and more slowly, prolonging the experience?

I can go both ways, but on this one, I want to finish it.

So I'm going to stitch awhile longer.
Posted by Ann at 6:20 PM 2 comments:

It has been a weird week--I've spent a lot of time with other stitchers and I've spent an amazing amount of time planning stitching.

But I haven't threaded a needle.

Tuesday I spent three hours in the dentist's chair having molds made for the permanent crown that will cover what's left of the root-canaled tooth and having the temporary crown placed.  After that was over, I staggered home and spent the evening getting ready for our sampler guild annual social.

This involved baking a cake.

Our sampler guild has some phenomenal cooks. Absolutely phenomenal.  So I decided to do my fail-safe cake, which has accompanied me to many social functions. I have been baking this particular cake since it appeared in Southern Living in 1982.  We are talking 30 years of experience with this particular recipe.

Admittedly, I don't make it as often now as I did when there were hungry teen-agers in and out and about.  Dearly Beloved was diagnosed with Type II diabetes and doesn't need to devour vast amounts of cake. Large and lovely as I am, I certainly don't need constant exposure to a cake that contains a pound of butter and three cups of sugar. However, I have experience with making this cake and know all its ins and outs.

Cake went into oven, looking as it always does, in the same tube pan I've used for the last forty years, lavishly buttered and floured so there would be no sticking problems.

Do you sense the Jaws theme coming up?

Cake came out of oven, nicely puffy and golden brown.  It was placed on the rack to cool for the designated ten minutes.

Then it was flipped over.

Half of it came out.

The remaining half remained in the pan.

So I sliced the pretty part into slices, placed them on an antique pressed glass plate, and took a partial cake to the social on Wednesday, where there was so much incredibly good food that no one noticed there was not an entire cake on the plate. Or if they did, they were too polite to mention it. So no stitching on Wednesday night.  (Please note the last time I had to make something to take for sampler guild, I burned the cheese biscuits, but the cookies I baked came out fine.)

In amongst all this, I was reading and printing out the first lesson for the Casket of Curiosities course.  It's actually and finally here!!!!  I am head over heels into the 17th century for sure!!!

Then last night I was doing the stuff I usually do on the week-ends--laundry and what minimal housekeeping I have to do to keep the Health Department at bay, so no stitching last night.

Because I have escaped my usual routine and am spending the week-end with Baby Girl. We are having a girls' week-end, which will include a viewing of The Avengers because we both really like big super hero movies.

And it has Robert Downey, Jr, in it.  And we both find him to be a force of nature which we must view.