I've had a hard time getting motivated this week. I think it's the heat and humidity--even with AC and fans running, it just feels stuffy all the time. And forget going outside--I went out to take an early morning walk and the steamy air turned me around and pushed me back inside.
So I've been reading a lot and stitching a little.
I did get the rest of the double running for this band of Hannah Thornbush worked last Sunday--did I tell you that? 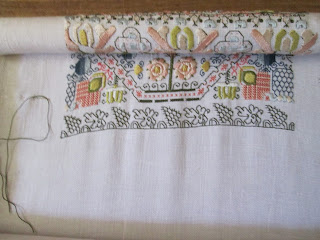 And I filled in some of the blocks on the needle case: 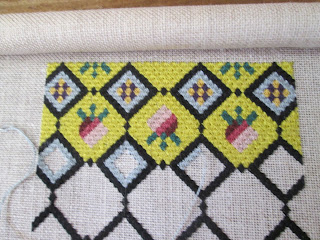 And I got the two end panels on Tsubaki's carrier case sewn together, although there were a few times that I used foul language trying to get things lined up and the pockets folded in the correct place.  I am beginning to see the light at the end of the tunnel, though. I need to add four little flaps that will fold in and help hold the carrier together when it's closed, and then there are embellishments to be added to the inside of the carrier, but I'm almost through.
First, though, I want to give it a good press. There is nothing a good pressing won't help.
Unless, of course, you scorch something.
Not going to think about that.
Posted by Ann at 10:06 AM 2 comments:

This was a much better stitching week--not quite a good stitching week, but a much better one.
I finally figured out a path for the double running stitch in this band of Hannah Thornbush that wouldn't make me totally bugnutz crazy or make my head explode. 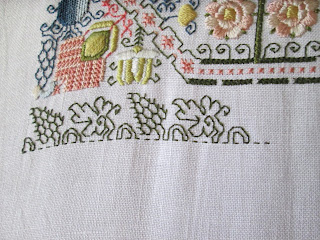 I didn't get all the way across the row. I have come to the conclusion that working on 45/46 count linen works best in natural daylight, so this is going to be my Sunday project.
Why don't I get a light that mimics daylight, you ask? I have an Ott light whose hinge no longer holds the bulb end of the lamp up--it's been tightened but it doesn't stay that way--and it's very disconcerting to have the light slooooooooowly and gradually close itself.  And the Dazor is letting me know about its age. Periodically it flickers and twitches just the very slightest bit. I was planning to audition lights this summer, but Covid-19 has put a stop to traveling and visiting needlework shops. So, I'm doing real daylight at the moment. 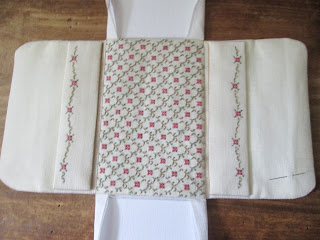 I have the two big flaps for Tsubaki sewn together. The next step is working on the side flaps, and I need to study my paper mock-up and the directions before I take the plunge.
I have decided that I need to work on a Jackie project as soon as I take the class. This may be a problem, since I take as many of her classes as I can possibly fit into my available vacation time and budget, and she designs faster than I can stitch.  And I also need to remember to work any outline stitch that will be required for assembly a little more loosely than I normally stitch so there's some give when I need to get another needle and thread under it. 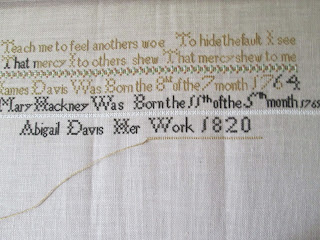 Hallelujah, the last band of lettering on Abigail Davis is complete! When I get the dividing band finished, I can move to the fun stuff!! And that means a little bit of basting, since the space between this band and the first motif is just enough to ensure that I'll be off. So I'm basting. Basting is boring but better than ripping.
And now to the mail.
I got the new spool holder that Jackie du Plessis offered. I didn't get a photo because it's in a project bag at the moment. I have some other accessory pieces that have been created from her buttons, and I'll try to remember to take a picture of the whole set at some point.
And these lovely kits finally arrived from Australia: 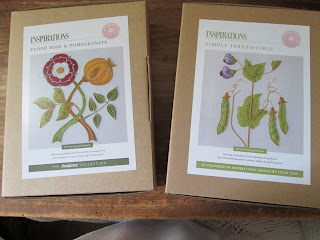 Inspirations offered these designs, created by Cynthia Jackson. I hemmed and hawed about ordering the kits when they first appeared, and by the time I ordered, Inspirations was out of some of the materials, so I had to wait until they were able to re-supply.  And then, with Covid-19, shipping from Australia just isn't happening very quickly.
The kits sat in Melbourne for almost two months before they caught a plane or a boat or some other form of transportation (possibly the back of a whale), and I tracked them across the US for over a week before they arrived. The kits were fine. The directions for the Tudor Rose and Pomegranate did not fare so well. Apparently the booklet got damp somewhere along the way (maybe riding the whale), and the pages were literally glued together. I tried to separate, but no such luck.
Now here is an example of exemplary consumer service. I emailed Inspirations. With a couple of hours, I had a reply--they were shipping a new copy AND provided a pdf so I could start stitching. I was thrilled by the rapid reply and delighted with the level of service.  I will be ordering from Inspirations again.
So that's been the past week. I think I'll pick up my needle and finish that dividing band on Abigail, and then see what grabs my fancy next.
Posted by Ann at 1:49 PM 1 comment:

This is the only thing I've stitched since last Sunday. 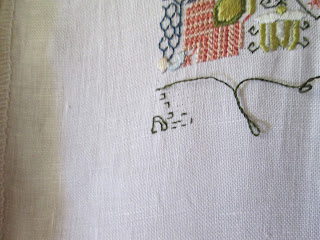 And I'm ripping it out.
Don't even ask. Retirement is looking better all the time.
However, it was a good mail week: 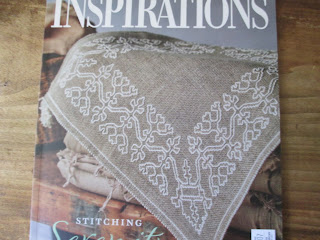 It is always a good week when Inspirations arrives. At least I could read about stitching, even if I wasn't threading a needle. 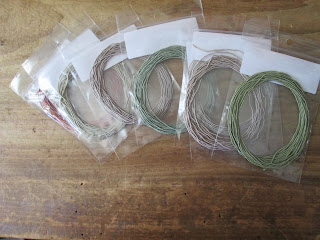 Tricia Nguyen is selling from her website about every 8 weeks during the pandemic and possibly beyond, and I added some more thread to my casket stash during the last one.  These are neutral colors of Cordon, which is a lovely thread to couch down. They will mostly be used on the castle panel of my casket. 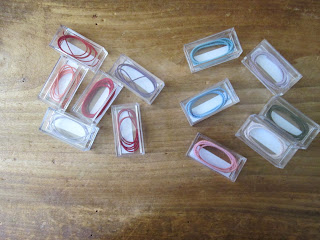 And here we have tiny silk purls and silk check, which can be stitched through or couched down. These colors don't yet have an assigned spot, but will be used as needed. There will be many, many flowers on my flat top casket, so I'm accumulating flower colors in a variety of threads. 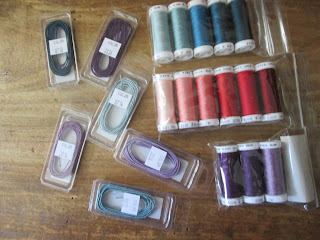 And here we have silk serpentine gimp which is couched and adds a subtle texture, plus luscious colors in 100/3 silk. 100/3 silk has become one of my favorite threads for needlelace. 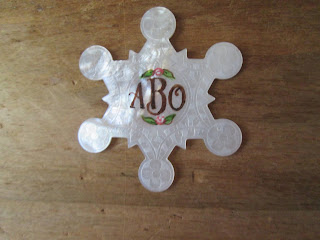 Last, but definitely not least, is the hand-painted thread winder from Jackie du Plessis.  It is so pretty I can hardly stand it.
On the same day, this month's button club shipment arrived with a little project that uses some of the buttons from a previous shipment. The photo did not come out clearly, and Dearly Beloved is grumbling that I've had access to the computer too long, so I'm not taking the time to retake the photo.
And I need to go back to ripping so I can do some stitching before I completely forget how.
Posted by Ann at 9:32 AM No comments:

My stay-cation ends tonight--back to work tomorrow.
Phooey.
I spent most of the day Thursday straightening up some of my projects, organizing and sorting. I kept finding started projects that I really want to finish, and added some more things to the finishing basket. It's been so long since I worked on some of the things I found that they're almost like brand-new projects, and I found a bunch of things that I couldn't remember why I laid them aside.
Short attention span, most likely.
Anyway, I didn't sleep well Thursday night, so I decided the only safe thing to do on Friday was plain cross stitch. And that means that Abigail Davis has one more line of letters. 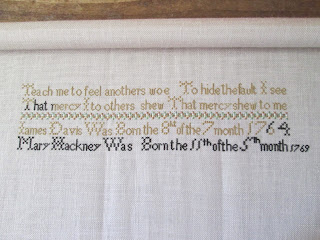 I need to do a dividing line, and then the final row of letters.
And I hitched up the granny panties and decided that I was going to get past a major stumbling block on Hannah Thornbush.
There has been one motif on this band that I just could not stitch to my satisfaction, and I have ripped it out more than once. I have done everything I could think of to make it look like I wanted it to, even thought about just leaving the outline stitches in place and not filling it in.
Then I had the frame sitting across the room with some things that I knew I wouldn't work on any time soon--and I realized I couldn't even see the motif as anything other than part of the whole.
Well, duh.
I'm always the person who says if you can't see it from the back of a galloping horse, don't worry about it--and I'm the last person to take my own advice.
So, I finished the band yesterday: 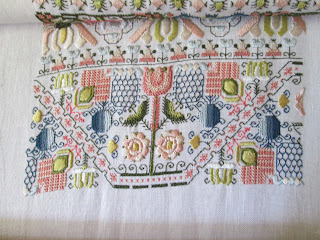 So, Hannah is staying downstairs with the things I want to stitch in the near future.
I've also decided I like puttering and jumping around from project to project. I'm not going to try to do any kind of rotation because I fail miserably at keeping track of a schedule for my needlework, but I have a stack of things I want to play with, some old, some new, and some that need to be put together.
Now if working didn't take up so much of my time . . .
Posted by Ann at 9:45 AM 3 comments:

A long, long time ago--and it feels like it was at least the beginning of the millennium--I decided to start a pandemic project. It's a beautiful sampler, but you have to begin with five rows of mostly over-one lettering.
Don't like doing lettering and don't like doing cross over-one, so I got two rows done and put it away.
Yesterday, while I was wafting the dust cloth around, I noticed the sampler in its pillowcase, hiding behind the project basket. This morning, I was feeling a little guilty about letting it sit around for so long with no love, so I pulled it out. 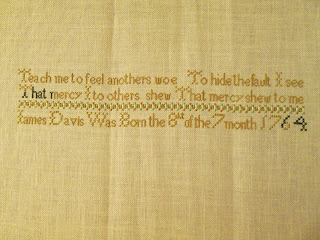 I have a whole 'nother row done. I believe that's enough love for this project for this week.
I keep telling myself that if I will just get all the lettering done, I can go to the fun stuff--and this sampler has a lot of fun stuff to do--but I'm not listening to myself very well.
Then again, it's my stay-cation and the whole point of it is that I can do what I want. So I will.
Posted by Ann at 6:42 PM 1 comment: