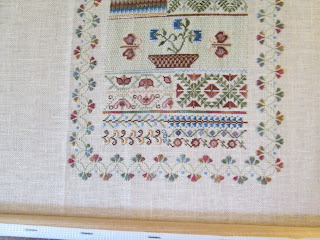 Actually, I think I'll pick up the pre-work for the two classes I hope to take from Betsy Morgan at Salty Yarns in June, assuming everyone stays at home for a little bit longer and the virus becomes less prevalent. Keep your fingers crossed on that.
Posted by Ann at 10:47 AM 3 comments:

The center design on Ode's panel is complete! 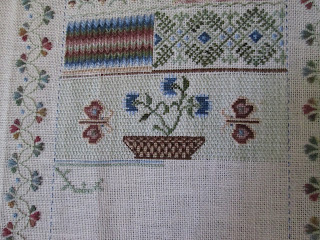 I love, love, love the basket--simply stitched with cross stitches and straight stitches, but to great effect! I also love the darning pattern in the back which gives the center panel a wash of color without overpowering the motifs.

The only problem is that it ate up thread. I had oodles of all the other colors, but the pale green used here is down to about two strands. And I have three areas that are going to require a good bit of that shade. I think I can eke out enough for two areas, but not all three.

I believe, though, that I can substitute the other shade of green in the kit and the third motif will look just fine. Anyway, that's what I'm going to try.

I had plans to make masks today, but Dearly Beloved is in the middle of a reorganizing project that is involving my cookbooks, which means I need to be on call since his idea of the way to sort them does not jive with my idea of the way they should be sorted. For example, I like having the ones that I use the most all together rather than sorted alphabetically either by title or by author's name. We are not the Library of Congress. And, yes, I do need three editions of the Joy of Cooking and the Fannie Farmer Cookbook, since later editions have added information and because I know exactly where to find favorite recipes in earlier editions.

I said I was going to stitch all week-end, and I tried.

But I got sidetracked.

I sat down to work on Ode on Saturday, and immediately my phone started ringing. I talked to Baby Girl and The Saint and the Cousin Who Does Genealogy (and everybody has one), all for several hours. It was lovely and a good chance to catch up since none of us would see each other in the flesh for Easter.

I stitched a little.

Then it was Easter, which was a very gray and gloomy day. So, I thought, since I'm working on Ode to Jane Austen, perhaps it would be fun to watch Pride and Prejudice while stitching--the good version with Jennifer Ehle and Colin Firth.

So I plugged the DVD in and threaded a needle . . . and had to stop--a lot--to look at the costumes (oh, the laces!) and to wonder what the sisters were stitching (did you notice that there was always some sort of needlework being stitched? and were they actually stitching or just stabbing the fabric in an intentional way?) and then there was Colin Firth. You have to stop what you're doing to look at Colin Firth as Mr. Darcy. Oh, my . . .

I stitched just a little more.

So this is where I am before I start stitching tonight: 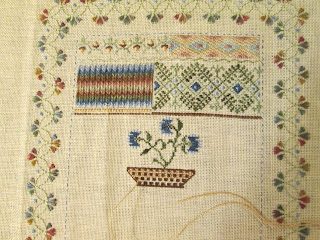 I'd like to finish the basket in the center, and there are a couple of butterflies fluttering on this section that also need to be done, and then a darning stitch background that will fill in around all of it--but I got more temptation today.

The pre-work for the classes Betsy Morgan is scheduled to stitch at Salty Yarns arrived in my mailbox. 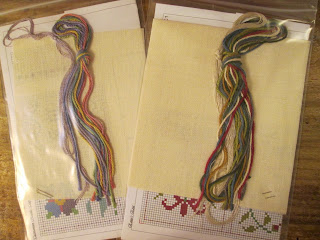 Just look at those yummy colors!

And keep your fingers crossed that we'll be able to travel to Salty Yarns by early June.
Posted by Ann at 4:46 PM 3 comments:

And it didn't get here too soon.

Last night, my plan was to iron the linen for the panel for the bottom of the desk for Ode to Jane Austen and sew it to scroll bars.

I ironed. I found scroll bars that were exactly the right length for the linen. There was a spool of thread and a sharp needle right by my chair (which is remarkable since my chair has become my office instead of my stitching corner). I sewed the linen to the scroll bars, got the side bars lined up, and got ready to put the knobs on.

The first two, no problem. Then I dropped the third and it vanished.

It vanished because there are about seventy thousand cords running from one piece of tech to another that allows me to work from home. Those seventy thousand cords have wound themselves around each other--do you remember that scene in one of the Indiana Jones movies when there are a kazillion snakes coiling and hissing? That's what it's like around and about my chair--well, there's no hissing but there is coiling.

The knob fell into the middle of all this.

I was afraid to untwist too much because I was afraid I'd accidentally unplug some vital bit from some other vital bit--but finally, I was able to locate and retrieve the knob and get it tightened on the end of the scroll.

And that's when I dropped the other knob.

Dearly Beloved wisely left the room to get something to drink.

Anyway, the second knob was attached. And you would think after that, I would do something else, but I really wanted to stitch. And I got the basting lines in (and, yes, they were miscounted and I had to do part again), and I finally, finally, finally was able to do the first motif.  And start on the second. 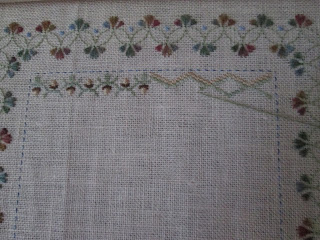 I am looking forward to stitching all week-end, even though I should start packing away my winter clothes and chase down the dust bunnies and do some laundry and get ready for our very quiet Easter celebration.

I thought I was writing this on Friday.

I was just informed that it's Thursday.

One more work day this week.

For some reason, I've had problems with the work/life balance this week. Part of it has to do with the fact that my office phone is finally working reliably again, so I've spent some time catching up on voice mails. Then, it's been hard to take breaks or time away from the work laptop to eat lunch or stretch or do anything but work. It's easy to get focused and suddenly realize three hours have passed during which only eyes and fingers have moved.

I'm going to work on that tomorrow. Maybe I should set a clock.

Anyway, here is where I am on Friday Thursday evening. 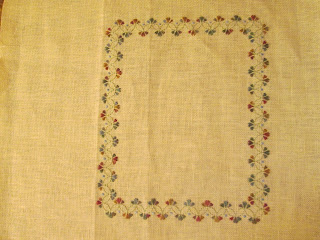 I am going to press the creases out and sew this to scroll bars and get started on the innards. And then I really, really have to start putting things together.
Posted by Ann at 3:58 PM 2 comments:

We have survived Week Two.

I'm finding it hard to have balance between work and home when I'm home all the time, but I'm working at it. As a result, I haven't stitched as much as I hoped.

And I had to put the Pandemic Project aside when I hit the wall on letters over one.  I decided that I wouldn't feel guilty about that since I am the boss of me and can choose what I want to stitch. So there.

I did get the two motifs that will go on the button bag for Ode stitched, and I have to say, they were intense. 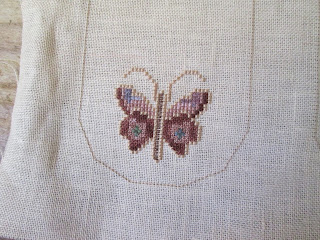 This one little motif has rice stitches, Smyrna crosses, mosaic stitch, and satin stitch. That's a lot for such a wee tiny butterfly. But it was fun to stitch. 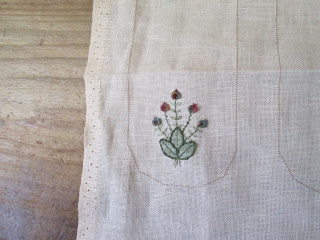 This one had a cast-on stitch for the flower buds, and satin, and lazy daisies, and hedebo buttonholes around the leaves. And that meant I had to search the innerwebs for instructions on hedebo buttonholes because I don't do them often enough and forget how to do them. Every time. You'd think if I can remember how to do several different kinds of detached buttonholes, I could remember to do this, but not so much.

However, this is done. And that leaves one part of the project to do, the sampler that sits on the bottom of the desk. I saved it for last because it looked like the most fun to do. I will shortly embark on a mission to find either the desired size scroll frame or stretcher bars.

Meanwhile, we have had one of our typical Domestic Disasters. The second washing machine in less than seven years died of a failed transmission. We weighed the relative dangers of having a service technician come to diagnose the problem or using a laundromat and decided to go with the technician. Then when the technician announced it would be cheaper to buy a new machine than parts and labor to repair the old one, we had to weigh the relative dangers of buying a new washing machine or using a laundromat for who-knows-how-long. So we checked online, made a flying trip to Home Depot to see it in person, bought it, and came home, where we immediately showered.  So we're doing another two weeks before we breathe a sigh of relief again.

I do have to say that the Home Depot we visited was doing everything right. They had six foot lengths marked out where you waited for entry and were only allowing a certain number of people inside at a time. The employees were masked and gloved and were wiping things down while we were there. So I'm not quite as nervous as I could be.

But I'm still plenty nervous, so we're hunkered down for the duration.