Maybe not so normal

My thyroid wasn't working very well to begin with, and now I have half of the poorly functioning gland I had before. And that may be one of the reasons that my sleep patterns have been wonky, all of which has left me feeling slightly dopey all the time. I only took four pain pills total, so I can't blame the meds. 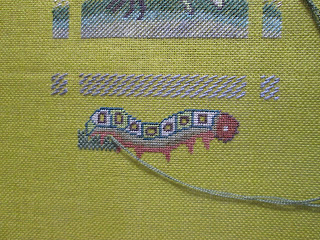 I have more of the caterpillar on Amy Mitten's Casket Keepsake. The next step is working the grassy mound under him/her--but it requires compensation and shading and counting and I found I couldn't handle that very efficiently. I usually follow the count twice, stitch once philosophy, but I was counting three or four times and coming out with a different number each time. Well, that would never do.

So I moved back to Hold Dear. 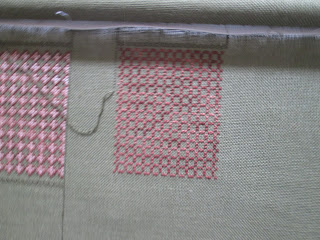 This was a little easier since it's a repetitive pattern. I now have the inner framework for the second pocket stitched, and I just have to fill in the little boxes. However, the filling has a pattern--not all the little boxes are covered--so I may have to see how well I'm functioning when I thread the needle.

I haven't touched this week's stitching for my online classes or the EGA pilot--they're a little more challenging than the brain fog will allow. I'm just hoping the sun breaks through soon--this pity party is getting to be a drag!

Gradually getting back to normal

I can focus my eyes again!  And I didn't sleep 13 hours yesterday!

Which meant that I was able to work on my online classes--almost caught up--and I did a little more on Amy Mitten's Casket Keepsakes. 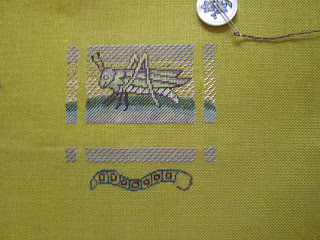 The metallic background stitches for the grasshopper are filled in, although working with those threads led to new and creative forms of profanity. In short, I don't enjoy working with them. But they do add sparkle, so I guess it's worth it.

However, the rest of today's stitching time will be devoted to working different kinds of padding on the goldwork class.

That bat out of hell just flew out the window

Last year, I started a lot of projects and finished very little. So, this year, I planned to stitch like a bat out of hell and get some things done, done, DONE!

That may not work out quite the way I planned.

We're getting to the TMI part of this post, so if you're here for the stitching, you may want to scroll down to the photos. For the last couple of years, I've had problems with wacky thyroid numbers. The last biopsy I had at the end of December showed cancerous cells. Luckily, I was able to see a surgeon right away, and part of my thyroid was excised in an out-patient procedure yesterday. The surgeon said that everything went beautifully and I should be fine, based on what the pathologist finds.

I'm still a little groggy from the anesthesia--it takes me awhile to get it out of my system--and it looks like my neck has been slashed--wait! it was!--but the main problem is this: it's going to take the other side of my thyroid a little time to get up to speed, especially since it now has to do the work of both sides. It will take two or three months to see if it can handle the demand, but they have to wait until then to determine if I should take a supplement. Unfortunately, during that time, I should expect to feel generally fatigued. All the time.

I have plans to attend workshops in February, March, and April. I have two online courses I'm taking, a stack of projects in the stash, and an EGA pilot to finish. And I'm going to be constantly tired?

Dearly Beloved says that I'm so hard-headed I'll probably forge ahead and get it all done anyway. However, I'm going to need to be a little more productive than I have been since the last post.

On Monday, I started stitching a band that will go along the top of a pocket for Jackie's Gardenesque. I took the class originally at Salty Yarns, but am going to take a refresher at Sassy Jack's in March to get it completely finished. 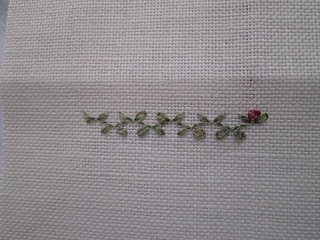 I don't like the way my Lazy Daisy stitches look on this, so I had already planned to remove them an do a broad chain stitch instead.
On Tuesday, I added some of the metallic thread to the background of Amy Mitten's grasshopper. 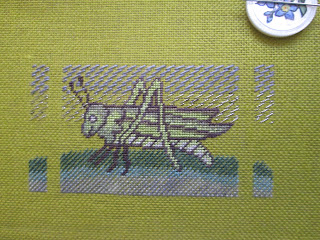 I have a solid silver thread to add to the background, then I can move to the caterpillar.
On Wednesday, I worked on the second pocket for Jackie's Dear Heart. 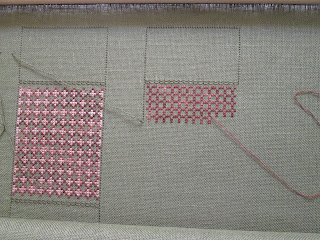 I had thought I would work on this today; it should be easy enough since it's all repetition--but I'm still getting cross-eyed when I try to focus, so I'm going to watch some mindless TV and veg for another day.
But hopefully, just for one more day.
I have things to do!

Change in plans (as if you didn't expect that)

Last night I finished filling in the diamonds on the first pocket panel for Hold Dear. 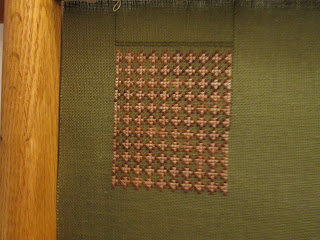 Before I did that, I had thought that perhaps I could get all seven pockets finished before February 1. Then I looked at how long it took me to work the center design and the outlining for one end--and I realized the only way I could get them all done would be to stitch pretty much all day every day between now and then. And today, I have yet to pick up a needle.

My electric needle rusted years ago, so it takes longer for me to stitch anything. Then, too, I have surgery this week. Despite it being an out-patient procedure, I have a feeling I'm going to be a little loony for a couple of days. If I can't focus my eyes, I don't think I'll get much stitching done.

Soooooooooo, I think I'm going to work on my EGA pilot and my online classes in the mornings, and alternate among several other projects in the evenings and see what I get done that way.

Even though I haven't put needle and thread together today, I've had plenty of stitching in my life. The new issue of Inspirations arrived. I've been drooling over several of the designs, but I'm not going to let myself start any of them or order any of the kits. Yet.

And Phillipa Turnbull of the Crewel Work Company has a Zoom meeting every so often, and today was the day. It was the first time I've joined in. It will not be the last. She is delightful! and we got to vote on designs we'd like to see in the line, and got previews of some of the prospective classes for the next Festival online and could ask questions about Crewel Work projects we might be stitching. It made me want to dig out a crewel kit or two or three.

However, now I need to think about throwing dinner together. It is a gray, gloomy, rainy, cold day, so spaghetti is on the menu. And a big salad. And garlic bread. And then we have Miss Scarlet and The Duke and All Creatures Great and Small for our viewing pleasure tonight. I'm looking forward to the evening.

I didn't really expect to get the rest of the framework stitched last night on the first pocket for Hold Dear. I surprised myself. And then, of course, I had to fill in some of the spaces just to see what they looked like. 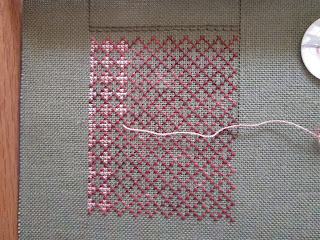 Just to make things a little more interesting, I decided to work the filling vertically since I worked the framework horizontally.
It takes so little to make me happy . . .
What would really make me happy is to get all the pockets done by the end of January. Having said that, I have just doomed myself to disappointment, based on the way past plans have worked out.
Posted by Ann at 7:41 AM 2 comments:

The sewing roll for Hold Dear has a bunch of little pockets, each of which holds a thread winder. I've started the first one: 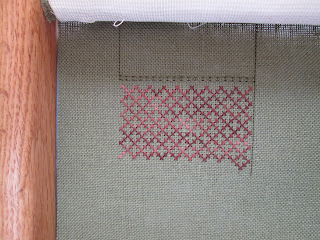 This is actually going to be good Zen stitching, soothing in its repetition. My online classes start back up next week, and I am working on that EGA pilot about which I can say nothing, but both are challenging in different ways. I'm going to need some peaceful stitching in my life.

I sat myself down yesterday and said I was not getting up (other than when absolutely necessary) until I finished the leaves on the outside of the sewing roll for Hold Dear. 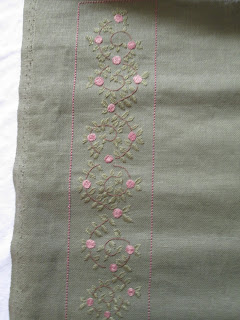 So that meant that last night I could sew linen to scroll bars to begin stitching the pockets that will live inside the roll, and I accomplished that as well.  That was too boring to photograph, so it will wait until there is stitching to display.

So at last I had something to blog about. I really planned and hoped to blog daily in 2023, but, like all other resolutions or goals or plans I've made over the years, it didn't make it two weeks into the new year before it fell apart.  And there will likely be a few more gaps--I've had some health issues over the last couple of years, and I am having surgery a week from today (if all goes as planned) which will hopefully take care of some of them. It's out-patient--but it means I have to show up at the surgery center at 5:30 a.m.

The thought of having to get up that early for anything is actually bothering me more than the prospect of surgery.