Yesterday the last of my Merry-Christmas-to-me orders arrived, all the way from Australia.

Alison Cole does the most wonderful designs. Any time I need a lift, I wander around her website--so many things I'd like to stitch!  And I have plans . . .

But to start, there are the following: 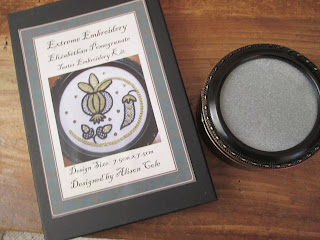 A beautiful Tudor blackwork/goldwork design, plus the box to put it in when it's stitched. 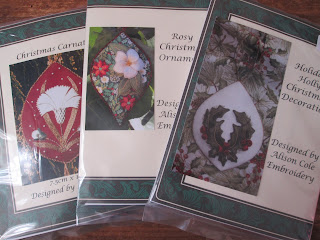 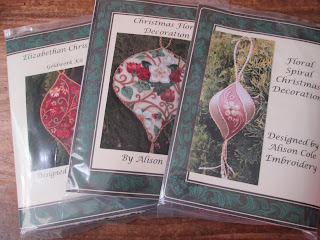 Motivation to follow doctor's orders and heal--I want to be able to stitch them all. RIGHT NOW--but I'll stick with the ice packs and rest for a little longer.

On the healing front--elbow is getting better. I can now brush my teeth without wincing. You laugh, but I never realized how often and for what mundane things I bend my arm.

And the cold is getting better. My head feels like it's only partially packed with concrete and I made it to work for two full days in a row. The complication is that I coughed so hard and so long last night that I have apparently pulled a muscle in my side, so every time I cough or sneeze or--good grief--laugh--it hurts.

This, too, will pass.

I'll just be happy to be able to laugh out loud again.
Posted by Ann at 7:57 AM 3 comments:

I have a bad cold.

At some point in the future, I may be able to stitch again. Until then, I am going to retreat into my blankets with my box of tissues, the zinc lozenges, and the giant glass of orange juice.

I stitched a lot last week-end.  A lot. To the point that my elbow started to hurt. A lot. It even woke me up in the middle of the night.

So, on Monday when I went to the doctor to get a shot in my wonky knee, I mentioned this. And the doctor started to bend and twist and poke and prod, and he hit a spot that made me break the current high jump record.

From a seated position.

He diagnosed the problem as a repetitive motion injury and I was told to use ice and stop doing what I was doing until it stops hurting.

So I haven't stitched this week and probably won't next week either.

I should probably stop bending my arm to see if my elbow is still hurting.

That  may be counterproductive.
Posted by Ann at 7:33 AM 4 comments:

Right now I'm working on a project that I can't talk about. The designer has asked that I not post pictures of her projects or discuss her classes on the blog, and I am honoring her request.

This makes the blog more than a little dull. I had thought that I would maybe I would just work on the design one night a week or alternate with something else--but that gets to be too much like a rotation or schedule.

And I have resolved to have no rotations or schedules this year.

It's a good thing I resolved to stitch at least five minutes a day and didn't require more.  This is all I've had time to do in the New Year--and if this is a portent of things to come, my stitching for 2019 is in trouble. 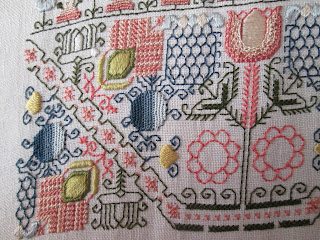 There is now detached buttonhole on the two circles, and I've started the buttonhole worked over the satin stitch in the central tulip.

Wednesday: Sampler Guild--I count that as stitching even when I don't thread a needle, just for inspiration

Thursday: Most of what you see above

Friday:  Belated New Year's Eve party. The host, after complaining to all and sundry that his wife's traditional Christmas Eve chili had upset his tummy--and refusing to see a doctor after three days of discomfort--ended up in the hospital with a ruptured appendix. After a day in ICU and a week in the hospital, he was sent home--and decided we were going to have a party. So we did. It ended early.

Saturday: We visited Mother yesterday. She finally seems to be adjusting and ate more yesterday at lunch than I've seen her eat in the last couple of months. She did remember that she was supposed to know us, so that was good, too.

Hmmm, apparently, I am, too.

I did not make it to midnight last night, so the ceremonial dumping of the ort jar occurred around eleven. It is now completely empty, waiting for this year's bits of thread from whatever I decided to work on.

I've been thinking a lot about my stitching plans for 2019 and have made the following resolutions:

And so, today, I have released Hannah Thornbush from her pillowcase and will restart her.

Here is where she is at the moment: 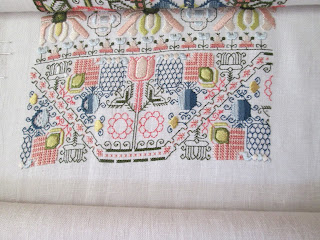 I went through the stitching basket yesterday and pulled out some things that I'm not feeling the love for and stashed them away. Then I went puttering around in the stash and pulled out some things that I was drawn to, brought them downstairs, and added them to the basket. I don't know when or if I'll work on any of them, but I'll have things handy when I feel like making a change.

Can I tell you how liberating it is to go into the year with no lists, no feelings that I "have" to finish anything? I may be getting over that first-born-girl-child streak of perfectionism and need for control, finally, at this advanced age!