That about sums up what I did yesterday.

Martha Edlin stitched an alphabet in eyelets, which meant that I had to stitch an alphabet in eyelets. Each letter was taking me 30-45 minutes to stitch and were about as boring as they could possibly be. So, after yesterday's trip to the farmers' market and reading of the morning newspaper and sorting of the laundry, I announced to Dearly Beloved that I was going to work on that $&!@#% alphabet until it was complete. 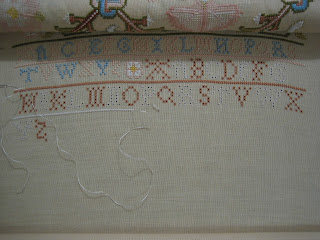 (Sorry for the shadow--this has been yet another rainy, gray week-end and I've had no sunlight for photography. Not that daylight would help my photographic skills, but it'll serve as a reasonable excuse at the moment.)

I had a Warehouse 13 marathon on Syfy to listen to as I stitched and it was raining off and on, so I spent the entire day and long into the evening doing eyelets.  My shoulders and back started aching and  I progressed from a case of numb butt to P3 (Painful Posterior Paralysis). When the last stitch in "Z" was completed, I lurched out of the chair like an old lady (please ignore the fact that I could quite likely be defined as an old lady), staggered into the shower, and fell into bed.

Needless to say, a needle has not been threaded in this household today.  However, I have only one more alphabet and a small spot section to stitch and Martha will be ready for the framer. There is a finish coming in the very near future!
Posted by Ann at 5:16 PM 3 comments:

Too tired to stitch

That about sums it up.

The office where I work is being renovated literally around us as we try to perform our daily duties.  The floor is divided into four quads and they are working on one quad at a time. Some people were moved off-site, where they will stay until the process ends. Some are telecommuting. And those of us who are on-site are moving around from one area to another as each quad is worked on.

It's like a cross between fifty people renovating fifty kitchens in the same space while catering a dinner and moving the contents of fifty homes whose inhabitants have lived there for fifty years.

I am mostly moved. This has taken all day. I still have a few vital things that must be relocated but I can't relocate them until IT sets up my station and connections--so I'm working at two desks. Of course, whatever I need at one is at the other. The two are about as far apart as they can be without being in another building.

I am supposed to be going to an ANG meeting tonight. I came home so filthy, dirty, sore, and tired that I immediately tottered upstairs and into the shower. Dearly Beloved has coated me with Ben-Gay and I have dosed myself with Aleeve. I am now slumped in my chair. Dearly Beloved is making scrambled eggs for dinner since that requires little in the way of chewing. When I say I am tired, I mean I am really tired!

This is on top of the most important event in recent times--we went to visit The Flash. It's been six months since we've seen the urchin in person and OMG, he is so much taller! And the baby roundness is starting to go away, leaving a lean and lanky young man who is still as busy as before. Sadly, it rained most of the day Saturday, so the outdoor festival we attended was a little muddier and messier than we had hoped. The Flash managed to entertain himself however. We also got to baby sit and (don't tell anyone) we let him stay up a wee bit past his bedtime so we could all watch Rise of the Guardians. We highly recommend it, particularly The Flash, who has taken to growling, "I'm a bunny." (If you don't catch the reference, you need to see the movie.)

Alas, there are no pictures. My camera battery died and I didn't have the charger with me.

The battery is now charged, but there is no stitching to show. Martha Edlin went to visit The Flash but she wisely stayed in her pillowcase in the tote bag. And at the moment, I'm working on the eyelet alphabet which takes awhile and isn't very interesting to see. It takes about 30-45 minutes to do one letter so I'm trying to do two a night. I am really, really happy that Martha lived in the 17th century and left out J and V--that means there are only 24 letters to stitch!

Not a single one was stitched this past week-end.

I had planned to do some intense finish-finishing. However, I didn't sleep well--not a good thing when you need to concentrate and deal with a new sewing machine that still has bells and whistles I haven't tried yet. Then it was gray, gloomy, damp, and cold. This is supposed to be the sunny South and I was wearing a turtleneck and a heavy sweater with an afghan wrapped around me.

I caught up on the stack of magazines by the wing chair. We went to see Iron Man 3. We did Chinese take-out. I let my brain get sucked out by the innerwebs. And all of a sudden the week-end was over.

However, tonight was different. 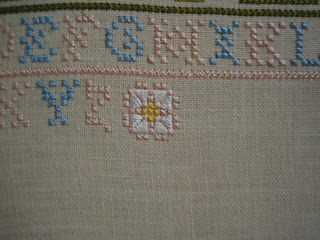 Recognize this?  Martha Edlin has come out to play. And I think I'm obsessed with her again.

I had so much momentum going when I ran out of white silk, then it took awhile for the new spool to arrive, then I went to Jeannine's, then came home to be distracted by other things. But, oh, my, I pulled Martha out of her pillowcase and that was it.

So please excuse me while I thread up another needle and get back to Martha.
Posted by Ann at 6:01 PM 3 comments:

For a variety of reasons, I didn't have a lot of stitching time in the evenings after work this week, but I was able to finish the needlework for the smalls for the Tea Time Basket. 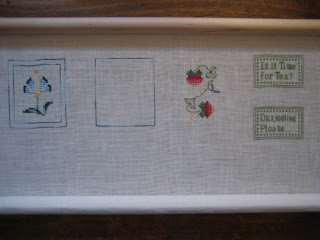 After being obsessed with this project for the last couple of weeks, it's over.

So now what do I do?

It's not that I don't have a multitude of projects in progress as well as a stash of frightening proportions. Somehow, though, when I've been totally immersed in one project, it's hard for me to see it end and move on.

Yes, I could do the finish-finishing but that's another situation entirely. Putting together is not a stress-free experience for me, and this week-end I'd like a little stress relief instead!

Maybe I should dust and run the vacuum instead of stitching . . .
Posted by Ann at 7:36 AM 2 comments: