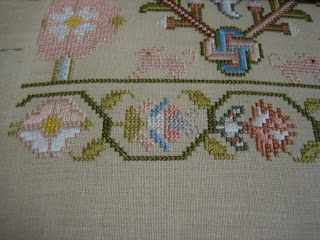 Half the flowers on Martha Edlin's final floral band are stitched.  I hope to have the rest of them completed this week-end.

You will have to bear with my being deadly dull and boring for a bit. I am soooooooooo close to finishing Martha that I do believe I will focus on her, forsaking all others, until she is ready to visit the framer. Ann Scutt can gaze reproachfully, Eve can continue to be tempted without me, and all the others in the basket by my chair can wait awhile longer. Martha simply will not let me go.
Posted by Ann at 6:10 PM 3 comments:

My own personal stitch-in 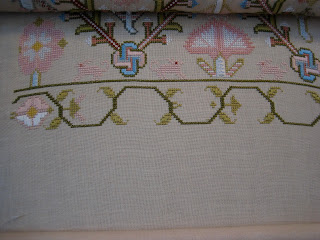 Our sampler guild had a stitch-in scheduled for yesterday. We're working on the prework for the Betsy Morgan casket etui class planned for April.

However, Mother Nature scheduled the dread "wintry mix" for Friday. We had sleet and freezing rain off and on all day Friday, which then froze into a thin but deadly layer overnight. Based on the weather forecasts, it was decided to hold the stitch-in anyway, with each person determining when it would be safe for her to travel.

I had packed my stitching bag with my completed pieces for Betsy's class in case anyone wanted to look at the changes I had made. I had also thrown some small projects in that I could work on while talking, since I have learned (finally and after many years of experience) that I can't talk and count at the same time. I can't listen and count at the same time either. In other words, I am counting- challenged.

However, when going out to get the morning newspaper, I skated across my small front porch, no mean feat when wearing slippers instead of skates. We get early morning sun on the cul-de-sac where I live--doesn't do a whole lot to melt anything when the temps are in the 20's. A couple of hours later, I watched as one of my neighbors did a 360 in the middle of the street. My car was parked where I could see it, and I decided I would wait to leave until the icicles hanging below the front bumper melted.

That finally happened about 1 in the afternoon. The official temperature may have been higher, but once the early morning sun passes, we have a lot of shade that keeps the area a little cooler. It's great in the summer to have this much shade but not so great in the winter.

Meanwhile, I had pulled out Martha Edlin and was making good progress on the last floral band. And Dearly Beloved asked if I really wanted to drive for about an hour to reach the stitch-in location, stitch for a couple of hours, then drive for an hour back. (Actually, I think he was enjoying a quiet afternoon at home and wanted company with whom to enjoy it. I had announced I was planning to act as if I were at the stitch-in, which meant that the chores could just wait, and he was taking advantage and avoiding his "Honey-Do" list as well.)

So I stitched on into the evening and got quite a bit accomplished--all the vines and leaves and one-and-a-half flowers. It was a lovely and quiet day, although I would have preferred the beauty of snow over the treachery of ice.

And I missed hanging out with the guild.
Posted by Ann at 1:58 PM 4 comments:

And there was much rejoicing! 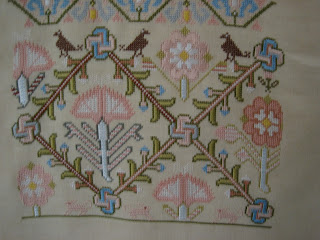 At long last, the moment I was beginning to think would never happen, happened.

The biggest band on Martha Edlin's sampler has been stitched!

I have completed entire projects that were smaller and that had fewer stitches than this one band. I do not have the words that would tell you how thrilled I am to have this done. To be perfectly honest, I dreaded this band--not sure why other than the size.

But it is done.

And what did I do with the week?

Obviously, I did very little embroidery. Very little. A pathetic amount as a matter of fact.


I had good intentions. I had a work-related trip that was going to put me in a hotel room for two evenings. However, a coworker also went on this particular trip, and this person felt the need to socialize in the evenings . . .so I didn't have as much time to myself as anticipated.

And this after taking my Ott light so I could work on Ann Scutt, who has only this to show: 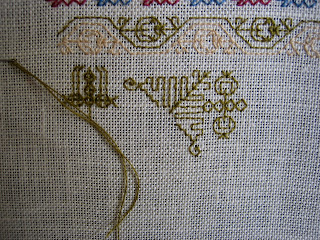 I had planned to get this rather wide band on Ann Scutt stitched while I was away, because once I was home, I knew that Martha Edlin would require my attention. But, alas, with trying to lower the mountain of paperwork that accumulated on my desk while I was away, this has been the extent of this week's progress on that front. 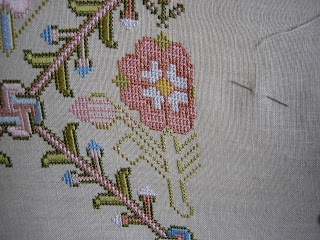 I need to dust and vacuum and clear up clutter and mop and do laundry today, but I think I'm going to ignore all that and stitch instead.  I think I'll be a much more pleasant person if I do.

Actually, it would probably be a good idea to do some laundry. Otherwise, we may have to go out to purchase unmentionables so we can get through the week. And that would take more time away from my needle than shifting things from washer to dryer as needed.
Posted by Ann at 10:22 AM 4 comments:

More on Martha and Ann 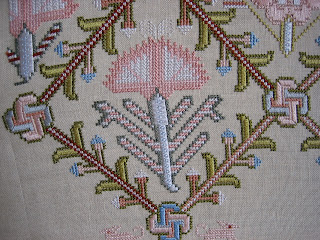 Martha has her biggest flower finished!!!! I am quite happy. It feels like I have made it over a major hurdle in this band.

(Note that I didn't mention that there is another quite large flower that has to be stitched, as well as smaller flowers before I can commit to a happy dance for the band.)

I also have this week's band for Ann Scutt stitched. This is the first time the green has been used in the sampler although there will be quite a lot more of it before it's done. 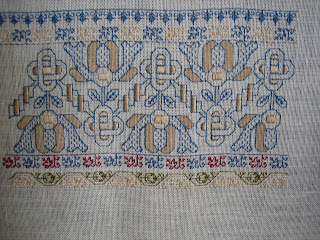 Part of it was stitched twice, but the less said about that, the better. Let us just say that attempting to stitch pale gold on pale gold-ish linen (although it looks much lighter in this picture, it's actually very creamy), in less than good light, late on a Friday evening after a long and somewhat stressful week, is not a good call. And even though it was unstitched on a quiet Saturday with quite good light, unstitching is never fun. I'm trying to decide if I want to substitute a darker gold since the one used in the sampler is all but the same shade as the linen. When there's a mass of it used, as it is in the tent stitch sections in Band Three, it shows up. In the double running patterns, it completely recedes.

I think it's going to depend on how energetic I feel about diving into the stash to see what I have that would work. At the moment, I don't feel that energetic. Actually, I think I'll take a Saturday afternoon nap instead.

I had said I wanted to stitch more and therefore blog more.

And thus I have barely touched a needle from New Year's until late yesterday.

It was back to work on Wednesday, with our sampler guild meeting on Wednesday night. I had to show up--I'm the president, so I needed to preside. It also happened that I was the program presenter for this meeting. However, I think the main reason I needed to be there was because I have the keys to the meeting place. That took care of Wednesday evening.

This is the time of year when we're doing our quarterly reports as well as our end-of-year reports, so work has been hectic and exhausting. About all I could manage by the time I arrived home on Thursday and Friday was a total collapse in a heap in my chair, followed by an early bedtime.

All of this changed yesterday. I decided that I was going to stitch and that was that. 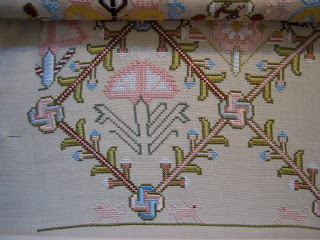 Martha Edlin now has half another flower worked.

And I put this on stretcher bars. It has been languishing for several years: 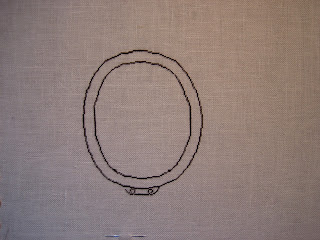 It will eventually turn into this: 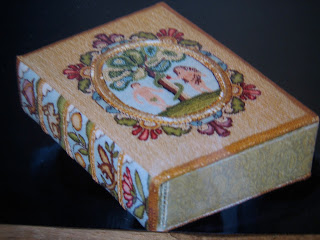 Tricia Nguyen taught this class at Christmas in Williamsburg several years ago. It is actually a box inspired by the embroidered book bindings from the 16th and 17th centuries. There are a couple of techniques used in it that I think I would like to incorporate into my casket so I have decided to pull it out of its long, lonely sojourn in the stash and use it for practice.

Besides, I really love the colors and the design and can't figure out why I haven't finished it before now.

Well, actually, I can. Something obviously came along and I said, "oh, shiny," and went trotting off in another direction.

Stitcher's ADD is a terrible malady.

And this is how I spent my time as I watched the New Year in: 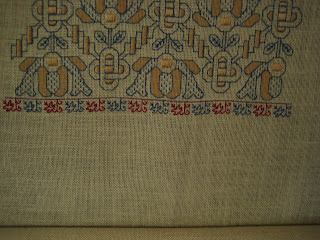 I'm trying to stitch a band a week on Ann Scutt. This is the band for this week and the only one on the whole sampler that uses red thread.

I spent most of the day today getting myself ready to stitch in the new year. The Christmas decorations are put away and most of the living room is back to its non-Christmas configuration, which meant that I am feathering my nest with projects.

In looking over the projects I completely completed last year, there were a lot of smaller projects and not a lot of larger ones. I love my smalls, but I want to have more of the bigger pieces done this year, so those are the things I put in my basket to start out the new year.

And I decided to avoid making resolutions this year, knowing that they would last about as long as it took to list them. Instead, I'm making "mores."