I stitched the other vein on the big leaf on Rebekah French. And that's about all I've done in the last week. 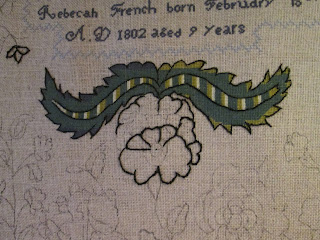 I also started working Nun stitch around part of a new project I planned to start.

Which you can't really see in the photograph. 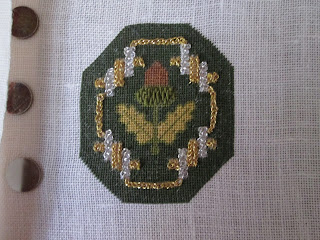 The stitching on the first of the golden accessories is finished!

I realized that I can't stitch metal thread stuff under artificial light very well, especially not fiddly metal thread stuff, so I decided to wait for a sunny morning at home--which means a week-end.  My plan is to work on bedazzling the second piece tomorrow, then the third and final one next Saturday.

And then I'll need to do the finish-finishing, but I'm trying to avoid thinking about that.

It is probably a good thing that Dearly Beloved slept later than I did this morning, because I had to talk myself through the stitch used for the silver thread. As in talking out loud. As in "over, under, pull up tight, through, under, and down". As in the steps I needed to work the knotted stitch. However, after overing, undering pulling up tight, etc, I got the stitch in my head and I really, really like it. I'm not sure where I can use it in the future, but I really want to.

Meanwhile, in the evenings after work, I've been working hundreds of tent stitches over one to fill in the leaves on Rebekah's big flower. 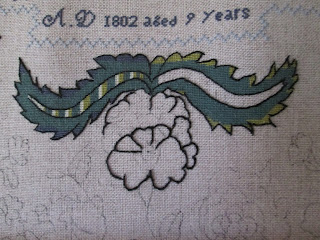 Please notice the stripes in the middle of the leaf. If they went horizontally, I'd decide that it was supposed to be shading on the vein. But they're not, they are obviously vertical. Why?
And it's not just this one sampler. There are other samplers front the same area with vertical stripes in the middle of their leaves. It does make you wonder what in the world the little girls who stitched this type of motif were representing. Or was this the teacher's idea? And if it was, once again, why? It boggles the mind.
And if that's the only thing that happens today that boggles my mind, it will be a nice day. 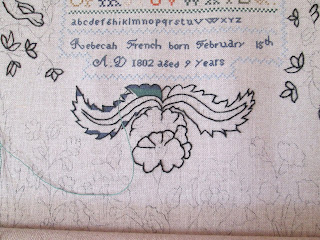 After stitching a lot last week, this is all I have to show for after-work stitching this week. 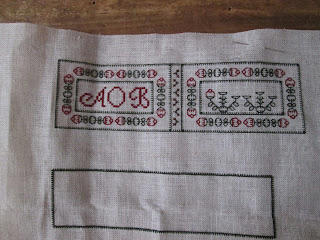 It probably would have helped if I hadn't had to rip out everything I stitched on one night on the next night. It turns out that I can count to two, but it doesn't help if the point at which I start counting is the wrong spot.

And, of course, the new book from Inspirations arrived this week and I spent a night drooling over the designs and reading the descriptions and trying to decide which projects I could probably work from stash and which kits I would like to add to the stash.

I'm trying to decide what I want to do today. I had planned to work on the Golden Accessories, but I'm also inclined to try to finish this needlebook. I may have to flip a coin. Meanwhile, I need to get the laundry started and the dust cloth wafting.

Today is the last day of stay-cation. Tomorrow I go back to the routine.

So today has been all about getting stuff together and getting organized to go back into the eating-breakfast-packing-lunch-dressing-in-business-casual-driving-to-work-working-driving-back-home-getting-organized-again rut routine.

I did stitch a little today. I was in the "whatever is handy" mode, so I picked up the Catherine Theron needle book. Considering I didn't have a lot of time to stitch this afternoon, I think I got a lot done. 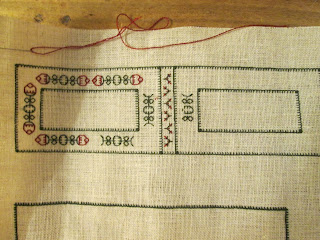 I need to chart out my name for the back cover, which may be tonight's task.

And what of this coming week? I have enjoyed blogging again, and I'm going to do my best to make time to stitch and blog--maybe not daily but as often as possible. And it's only 7 1/2 weeks until my next stay-cation.

I am being tempted to stray from my original stitching plans.

This flew in from Australia today: 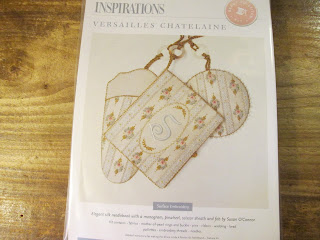 I'd been going back and forth about getting this ever since it was published in Factoria, one of Inspirations' Passion for Needlework books. It is just the kind of prissy thing that appeals to the prissy person deep inside me. Then, they announced that the kit would be discontinued so they'd have room in inventory for the kits for the new book coming out.

I have not allowed myself to start it. I've been doing something else, and it's not the gold work I was going to practice.

I've been listening to discussions as part of Winterthur's virtual textile symposium, and I discovered that I can stitch and listen without losing the train of the discussions as long as I am working on something relatively mindless. And Nun Stitch is about as mindless as it gets, so I pulled out a tiny Catherine Theron needle book that I started outlining awhile back, and I've been happily listening and Nun-ing ever since. 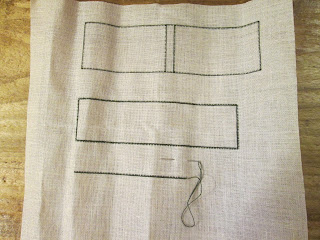 Not the most interesting thing to look at in its present state, but as long as I've come this far, I think I'm going to finish the second needle page.

As long as I'm talking about listening to the Winterthur programming, I should probably mention that there are both an exhibit at Winterthur and one of the lectures from the symposium featuring Erica Wilson. And I should also mention that when I really got into stash-building, some of her crewel and embroidery kits made their way into my stash. And they have been aging to perfection for lo, these many years. Seeing them in the online exhibit brought them to mind, and I may fall down that rabbit hole at any moment now.

I really need to retire.

This, That, and the Other

I lost track of time yesterday, but today may make up for it.

I've been working on the gold bits of the Golden Accessories, and I have been learning patience in the process. Gold Wire is stitchable. It is not cooperative. It has a mind of its own, and we have been trying to come to a meeting of the minds. Therefore, I have been stitching slowly and deliberately so as to avoid kinks and knots and other misbehaviors. This is not unlike dealing with a two-year-old. 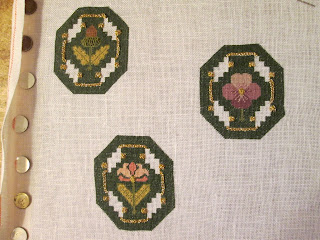 But I've made progress, which is going to be a bit slower for awhile. There are three stitches used to fill in the open spaces, and they are stitches that I am not comfortable with, so I need to pull out a piece of scrap linen and practice before I start stitching them on these bits. These are teeny little spaces, and there isn't a lot of room for error. Or frogging.

Then yesterday, I went stash diving looking for a started project that I'd like to finish. Instead of finding it, I found something else. 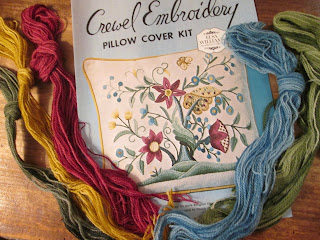 But meanwhile, I am enjoying this year's Textile Symposium from Winterthur. It's virtual, as you might expect, but the talks have been beautifully done and extremely informative. We have access to them for the month of October, so I can re-watch and re-listen at any time.
That said, I miss being at Winterthur. I miss seeing people I generally see only there. I miss having the opportunity to take classes and tour the museum. I miss the wonderful hospitality extended to attendees at the conference. I miss the drive there and back through the Shenandoah Valley in the Fall. I know that there will be an opportunity sometime in the future, but right now, I'm very tired of doing everything at home.
P.S. The television has been set up. I sent Dearly Beloved on an errand and read the directions so it was playing nicely by the time he returned. He's been growling about that ever since. Cranky old bear.