I finished off the Thistles on the Tasmanian Needle Tidy yesterday and started on the second band on this panel. 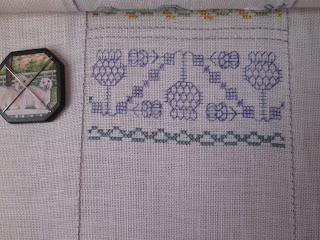 I stitched the second band according to the color on the chart.

The chart was wrong.

Instead of the dark teal, it should have been the bright multicolor overdye. There is a line of double running between this band and the next, but it was a little difficult to determine which color the line was--so I pulled out my copy of Willing Hands 2 since it has both color name and color designation.  And then I discovered the chart on my original set of directions used the wrong symbol for the band color.

Originally I was supposed to take this class as a f2f. In 2020.  When the class was cancelled, Betsy allowed the kits to be sent since just about everyone in the class had taken her classes before. I was working from the chart in the kit since it was easier to use than the book.

The two symbols are very close, so it was an easy mistake to make when charting the design. And I thought about leaving the dark teal--but the overdye is so bright and colorful that I can't leave the teal and be happy with the panel.

So, today I will be unstitching.

Or maybe I'll do that tomorrow.

Or the next day.

I do have other things to stitch. . .