Any progress is better than none. 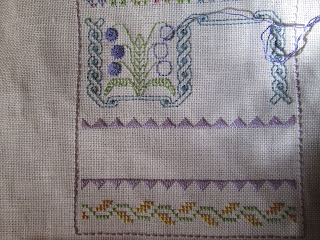 At least I got the first three of the six spiral trellis stitches done. Actually, I like doing spiral trellis, but it's the only stitch that I absolutely have to do in hand. And that meant that I had to take the side bars off the scroll frame so I could manipulate my way around.

Which meant that I was jabbed and bashed by the scrolls as I turned the linen. If you think I was going to take the scrolls off and then sew them back on again, you have a far higher opinion of my industriousness than I do.

It occurred to me later that I could have waited until the rest of the piece was stitched. Well, duh, but now that I've gone this far, I may as well finish as I began.