Over Three, Under Three

Today I've started working on the double running for the next band on Hannah Thornbush.  17th century samplers were frequently worked over three threads, so I have to remember to count to three rather than two. 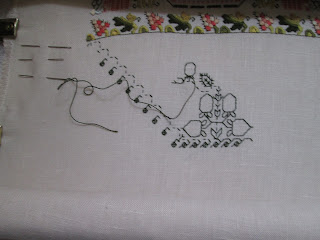 I believe I've finally regained the ability to focus on 45 count linen, which is a major surprise considering I've had two nights in a row with very little sleep. Yesterday there was no stitching at all due to general fogginess and overall meh.
And I did not expect to stitch today, since we were supposed to have lunch with friends in the early afternoon. Just as we were getting ready to leave, we had a call that they were on their way to try to find a place offering Covid tests. Both are vaxxed and boosted--and both were exposed to a grandchild who apparently caught a mild case at daycare. Both of them woke up with sniffles and a dry cough this morning and spent a few hours trying to decide if they needed a test or not. Luckily for Dearly Beloved and me, plus the wait staff at the restaurant, they decided to be checked out.
We will reschedule for a couple of weeks from now. I suppose this is the new normal, and we'll just have to exercise more patience and more care.
Posted by Ann at 12:03 PM