Mother worked diligently to make sure The Saint and I were properly reared. For example, if we were offered something we despised, we were not allowed to say, "I hate that!!!" Instead, we were to say, "This is not my favorite." The offerer was supposed to be able to interpret that code to mean that you hated it, and was to withdraw the offer.

The stitch for the last mound on this panel is not my favorite. 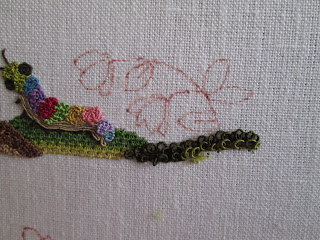 You're supposed to create loops of silk gimp and stitch them in place.

That bit of fuzz is from the last shade of green that I ripped out. For the third time. My loops kept pulling out, even though I was working them the same way I had worked the previous two shades. I have no clue as to the reason, other than ever-increasing levels of frustration.

I decided that I should perhaps stitch something else for the rest of the day. Actually, the friend that I'm working on this with has decided to do another stitch entirely on this little hill. I think I'll do the same if this is repeated elsewhere in the project. Life is too short.

I have had success with Carmen's Etui: 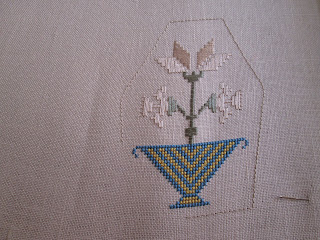 The base of one of the handles  is done. This motif is repeated three more times on the handle section. Luckily, It has gone quite well.
I have now jinxed myself.