Here is the final "B" for the back of my Bluebird Needlecase. 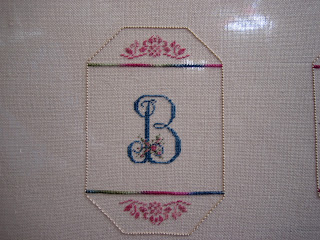 This is the third attempt.

I found a similar letter, but without the flowers.  It was smaller, so I thought I would cross stitch it over two threads.

That looked too big and clunky, especially since everything else is over one.

So, it was ripped out.

Then I found another, flowing Italic B.  I loved it.  I counted out the stitches and it was too big so I didn't even stick the needle into the fabric.

Then I found this one.  I liked the lines and thought the spray of flowers at the base would go well with the filigree at top and bottom.  And I counted wrong and it was too far over to the right.  So I ripped it out.

Finally I did what I should have done before I started stitching.  I basted the center lines, found the center of the letter, and stitched from the middle out.  At this point, it was after midnight and I could no longer focus my eyes.  This morning, before I even had the breakfast dishes in the dishwasher, I plopped myself down in the wing chair and got it finished.

I'm finally completely ready for the second lesson! (The project has four lessons, and the online class ended over a month ago. Sigh . . .)
Posted by Ann at 11:05 AM