which has nothing to do with stuffing the turkey.

Tonight I stitched the padding for the bluebird down and it looks like this: 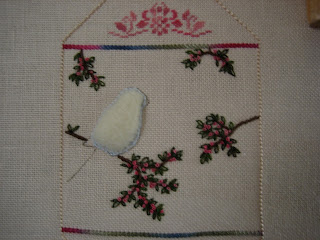 Quite frankly, I'm relieved.  I was concerned after I stitched in the flowers that I had too much flora for the fauna--or, in this case, avis.  (Woo Hoo--five years of Latin finally came in handy for something other than crossword puzzles!)

But now that I have the padding in, I think the dimensions will work, and the little bird will stand out from his background sufficiently.

I also pencilled in the direction lines for the long and short shading, which makes the poor thing look like he has some sort of disease.

I'm very happy the lines will be covered by stitching.

Now to thread up and start stitching.
Posted by Ann at 6:10 PM