I was going to try to blog every day in November, but didn't make it yesterday.  Dearly Beloved and I were both wiped out when we arrived home from work.  We briefly discussed going out for dinner, then broke out the emergency rations (frozen pizza) and tottered off to bed early.

I think I watched "Grimm," but don't ask me to tell you what happened.

Anyway, this meant I woke up at 3 a.m., wide awake and unable to go back to sleep.  After trying a number of different sleeping positions (why is it when you can't sleep, you suddenly have more arms and legs than normal and no place to put any of them?), I gave up and got out of bed, lurched downstairs, and stitched.

And this is what I did in the middle of the night: 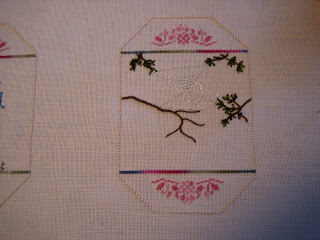 Dark, out of focus--middle of the night (which looks like all my other pictures)--but I have branches and a start on the leaves and a cobweb.

Marsha has a neat way of working the branches in whipped stem stitch.  The thickness you want the branches to have determines the number of strands of floss used. So for the largest branch, she suggested three strands. When you reach a point where the branch . . .well . . .branches, you drop a strand and stem stitch the next area with two strands. For the smallest branches, you use only one strand for the stem stitch, then whip back up it with that one strand. When you reach the area where you dropped a strand, you add it back to the needle and whip to the next dropped strand, and so on.  It's hard to see from the picture, but the branch has more dimension and weight where it should, looks more fragile where it should--and then I'm covering a good bit of it with leaves!

This technique would work nicely on other projects--I think it would be a very subtle way to handle the branches of a tree on a painted canvas, for example.

She also suggested using an overdyed thread for the leaves so that shading automatically occurs, giving them more depth and a more natural look.  Unfortunately, the skein of thread I have doesn't have quite as much variation in tone as I would like.  I thought about using another thread but Dearly Beloved says that he can see the variation--and one of the things you find about having cataracts is that they throw your color perception off.  With that in mind--and since I would really like to have this in the completed pile, I will probably leave it as it is.  This is a project I took primarily as a learning experience.

Hopefully I can get the rest of this area and the background for the bluebird stitched tonight, which will give me tomorrow to start the actual padded embroidery.
Posted by Ann at 1:44 PM