When stitching the Bluebird Needlecase, you're offered the option of stitching areas that will be hidden by the needlepages-until they're lifted to retrieve a needle.

This is what the hidden areas look like before they're hidden. 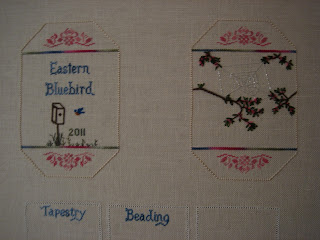 There is a spiderweb stitched in Accentuate on the right side--it's hard to see but it's there.  You can also see the needlepages that will go at the top of each piece.

I have not yet picked up my needle tonight.  Instead, in light of the OMG-Thanksgiving-is-next-week-and-Christmas-is-right-behind, I came home from work and cleaned the pantry.  I needed to inventory the baking stuff anyway, and clear room for holiday provisions.  And we were having a leftovers night (since I want to clean the frig tomorrow) so it was a good time to do it.

There is a Certain Person who lives here who shall remain nameless but who is called Dearly Beloved--on occasion--who likes to experiment with new flavors.  He has been accused to going to the grocery store to sightsee.  He especially likes to try new combinations of seasonings in crackers.  He brings in boxes of crackers, tries one, decides he doesn't like it but eats another to be sure, then sticks the box on the pantry shelf to go stale.  I can tell you with certainty that in this household there are four crackers that will be eaten:  Wheat Thins, Premium unsalted top saltines, multigrain Club crackers, and Carr's cracked pepper water table crackers. The others will not.

And then there is the cereal.  He does experiment there, too, but he's better about eating the majority of the box--except for the last bowl's worth.  For some reason, he cannot eat the last bowl in the box.  So we have a shelf of almost finished boxes of cereal.  (When I eat cereal for breakfast, I eat oatmeal because I was indoctrinated to believe that people need hot breakfasts and cold cereal is not-quite-proper. Cold cereal is for eating on nights when you don't want to cook and there's no one at home to fuss about it.)  Those almost-finished boxes of cereal are also left to go stale.

I threw out enough grain tonight to feed a subcontinent and I am very unhappy about the waste.  I don't think I'm going to have a come-to-Jesus meeting about it, but I think the next "new" cracker that appears in this household is going to show up at every meal until the box is gone.  And there may be a "Cereal Surprise" breakfast one week-end.
Posted by Ann at 5:49 PM