For World Embroidery Day, I declared that I would work on the saying on Mary Ann Turner until it was all stitched, even if I didn't get another thing accomplished.

I didn't get another thing accomplished.  (I lie--there were a couple of meals made and eaten, and I read my email and sent a few, but since it was World Embroidery Day and not Domestic Diva Day, the dust bunnies are multiplying freely.) 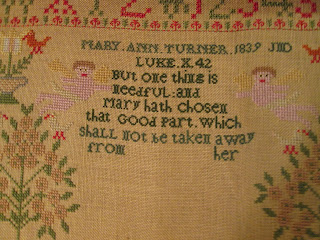 The remaining space on this third of the sampler is taken up with a honkin' big house. The last time I stitched a house was in 2019. At that time, I said I was going to take a year off from stitching any sampler that had a house on it, since I had done three samplers in a row with houses. I guess, since that was three years ago, I am due.

But once that is constructed, the middle third of the sampler will be done, and I will be almost a month ahead of my schedule. I believe that I will continue until the bottom third is finished.

After that, I believe I will go wild and stitch whatever I want in no particular order for awhile. Or I may go into turbo-finishing mode. Dearly Beloved has precipitated two avalanches from the finishing basket in the last week and is beginning to get a little testy about it.

And it would be nice to have the level on the basket lowered.