I started on the dividing band between the first two rows of eyelet letters, and, wow, it is fancy! 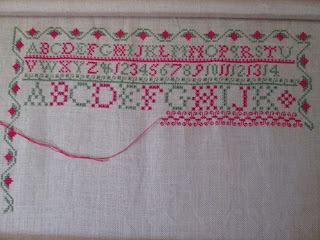 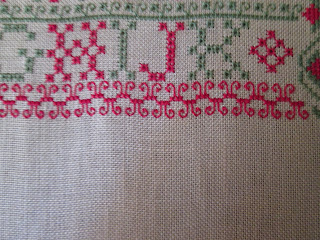 I don't think I've ever seen a band like this on any other sampler. Not to say that it doesn't exist or that I've ever seen every other sampler in the world, but this is a new one for me, and quite special.
But as I was stitching last night, I got all fumble-fingered--I'd count two threads and then put the stitch over three--and then wouldn't notice it until I was an inch or more away--so I'd have to rip back and fix it. After the third time that happened, I decided I should not try to count. I needed something to work on that required nothing more than even tension.
And that means either basketweave in needlepoint or crewel. I went to crewel because I have one of my oldest WIP's sitting in my stitching basket.
I had pulled this out last year after it had languished for something like four decades and I stitched a bit in it then. Now it has another completed flower. 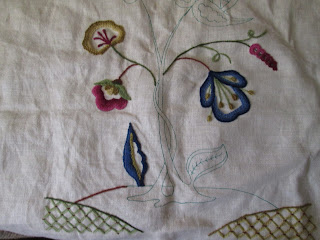 I don't know why I don't keep a crewel project going all the time. Actually, I have a bin of vintage Elsa Williams kits and a stack of projects from The Crewel Work Company in my stash, and I always enjoy it when I do it. So, along with everything else I want to stitch right this minute, I'm adding crewel to the list.
Once again, biting off more than I can chew--but it's so much fun to try!
Posted by Ann at 8:02 AM