Friday the 13th on a Wednesday

I had a whole rant about the way this morning went, but then decided the title said it all, and no more needs to be said.

However, some stitching has occurred, so the day hasn't been a total loss. The first alphabet on Mary Ann Turner is done: 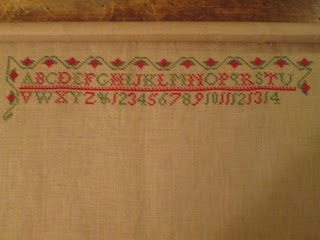 I used to stitch all the borders on schoolgirl samplers before I did anything else, mainly because I find those borders a wee bit boring to stitch. The problem is that if you mess up somewhere, you don't find out until it's time for the borders to match--and then it's too late. And that is a right royal pain.

So I've decided to spread the pain out a little, and work the border as I work the insides. There is another  alphabet to go, which will complete the top third of the sampler, and then I can get to the fun motifs.

You may recall I don't enjoy stitching alphabets either--so on this sampler, I'm getting over most of the things I don't like right from the get-go.

I once told a friend that the lack of borders is one reason I prefer band samplers. This so-called friend then said that I should realize that band samplers were just rows of border stitches. I stuck my fingers in my ears and said La-la-la-la very loudly.