I started on the next-to-last motif in the Tudor class I'm taking. 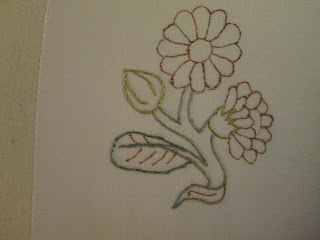 So far, I've outlined all the greenery but I still have to outline the marigolds. This motif is based on one from the Bacton altar cloth, which was probably embroidered at some point during Elizabeth I's reign.

I have not finished the gold work rose. Because this class is taught primarily on videos, which will be available for only a limited time, I've decided to do enough on each motif so that I would know how to complete it, then move on to the next. That way, I think I'll be able to get the whole project completed even if the videos aren't accessible.

And, since I have the attention span of a gnat, I need to be able to zip from one project to another. I haven't done as much of that as usual, and it's starting to tell.