(apologies to the Mamas and the Papas)

All the leaves on Morning Has Broken are now filled in: 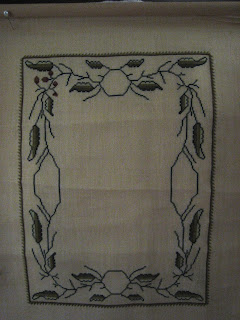 Wonder what has caused those big creases in the middle . . .there may be some judicious pressing in the near future.

I've been under the weather a bit lately, and that's the reason for the down time for the blog. Not much to talk about when you spend the week-end wrapped in a blanket being generally grumpy. I have been lucky in one way, though . . .I was supposed to have lunch with a dear friend, followed by a stroll through one of the local malls, admiring everything and buying just about nothing. However, Friday evening as I was pondering whether or not I could heave myself up and out of the wing chair without heaving otherwise, she called. Her baby boy arrived home from his first semester at college, bringing her all his dirty laundry (she's planning to burn his sheets) and a virus.  To be as delicate as possible, she had been spending a good deal of time closely inspecting one of the fixtures in her bathroom.  As we were both unwell, we did not do the mall stroll this year.

However, Dearly Beloved and I finally made it through Tree Trauma II (half the string of lights burned out--right in the middle of the tree--as soon as it was draped around the tree, meaning that the lights had to be redone--luckily before the ornaments went on). Dearly Beloved was not happy, but he was not about to argue with a crabby woman wrapped in a blanket and feeling unwell.

And the halls are decked. Most of the presents are purchased, but not wrapped. I start the baking tomorrow. Baby Girl is arriving Friday night for our early Christmas, to be held over the week-end, with Mother and The Saint arriving for dinner and presents on Sunday. Then I have a glorious week at home to sit by the tree and stitch. And stitch. And stitch. And sleep late. And watch old movies. I cannot tell you how much I'm looking forward to that!