Since we had had our Christmas get-together on Sunday, and Dearly Beloved had to work, I had Christmas Day to myself.

And what, I said to myself, would make this a perfect Christmas if I can't have family around? (Keep in mind that I spent about an hour on the phone with the Big Kid and The Flash on Christmas Eve--The Flash kept popping out of bed to announce that he needed a snack or a glass of milk--then spent probably longer than that with Baby Girl on Christmas Day.) Well, for a needleworker, the Perfect Christmas is spent with needlework and music and Christmas movies on DVD.

I think I mentioned several days ago that I had an overly ambitious list of projects I want to stitch in 2014. So yesterday I went stash diving to make sure I had all the parts and bits for some of the things on the list together. 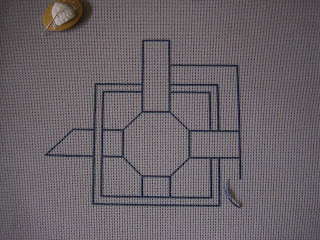 This is the beginning of the framework for a canvas piece call "Journey," which was a cyberworkshop taught by David McCaskill for ANG a couple of years ago. At the time, I was not feeling the love for canvas. I had stitched the center medallion and put it aside. When we had one of our "water events" last month, it floated to the surface. Last night, I started working on the rest of the framework for the design and enjoyed it quite a bit. So it's in the rotation. 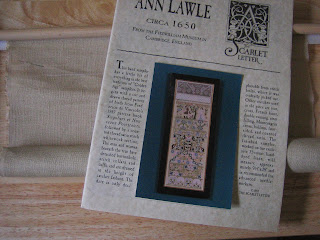 Ann Lawle will be my 2014 entry in Nicola's Scarlet Letter Year. I think I'm going to spend this afternoon setting up the outline for the cutwork section at the top. Once it's started, I can move into the polychrome bands below. I've found it better to wait to cut threads until the majority of a sampler is embroidered. 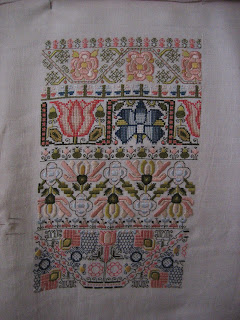 Lovely Hannah Thornbush, started as one of Essamplaire's online classes but now available as a kit (don't say I never enabled anyone!). I do love this sampler and can't remember why it was pushed aside, but this may be its year to see a completion. I think I'm about a third of the way along.

If I manage to finish Hannah in a timely manner, I'll go back to Examplarery's Mary Atwood, which is about halfway to the finish line. 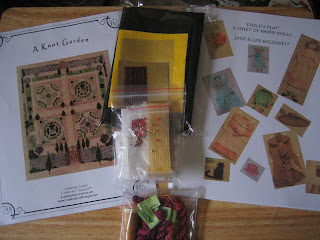 I have three online classes which have either just started or are starting, and I want to at least get them framed up and ready to go before I head back to work on Monday. From the left: 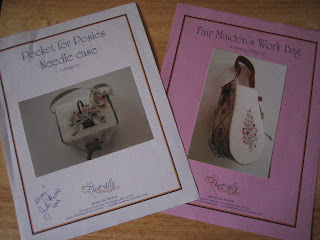 Two different sets of smalls from Jackie du Plessis. I had originally planned to put only the Fair Maiden's Work Bag on the list, but then the carrier and accessories for the Pocket for Posies needle case arrived and that was it, no question at all.

My resolution on smalls this year is that it can't go in the finishing basket when the embroidery is done. It has to be finished. Period. Hopefully, although it isn't formally on the Overly Ambitious List, finishing will also be accomplished this year.  Again, if I'm very efficient in my needlework this year, I will add Betsy Morgan's Toy Chest and Ellen Chester's Lady's Work Box to the list. 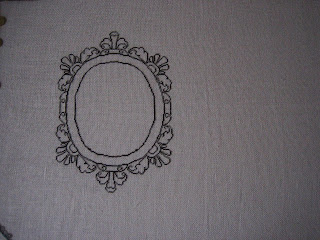 The barest bones' beginning of Eve in the Garden of Eden from Tricia Nguyen. I also need to add the small designs from the first Cabinet of Curiosities kit to the list, but I'm going to work on this first.

Morning Has Broken has not dropped off the face of the earth, it's going on next year's list as well. 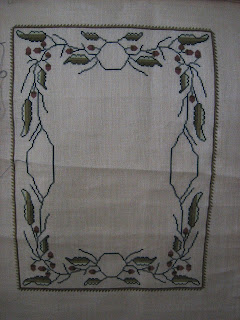 All the strawberries are stitched in, but I still haven't pressed out that big crease in the middle.

Originally, after I managed to get all the outline for the border finished over Thanksgiving, I had visions of working all the strawberries and flowers and birds and bees in the outer edge before Christmas. Then I was going to embroider the middle during my week off from work. Best laid plans . . .between going to Williamsburg and taking three classes, decking the halls, baking and cleaning and doing all that other holiday prep along with working some long days, I didn't get much needlework done.  OK, said I, I will get that border embellished while on vacation, then work on the center after the New Year.

Baby Girl suggested that perhaps the fact I started this part of the design at 10:30 p.m. on Christmas Eve could have had an effect.

She is probably right, but I think I was looking for an excuse to go stash-diving.

Anyway, these are the projects that have taken up residence in the stitching basket, which has returned downstairs. I'm not saying I will be able to avoid temptation or be led astray by other pretty faces, but this is what I'm starting the New Year off with.