I stitched in the framework for Ann Lawle's first band last night: 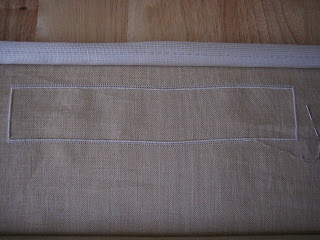 This is going to be my Scarlet Letter sampler for 2014. If I stitch a band a month, I'll have the sampler finished by the end of the year. I say that now. Some of the bands have more going on than entire projects I've worked in the past. Even more than projects I have going on now!

This band is worked in cutwork. The original had birds which are upside down to the rest of the sampler. That has always bothered me until I decided to stitch them right side up--after all, my house is not historically accurate to the 17th century, nor are the materials I'm using to stitch this sampler.

I did realize as I was nearing the end of the framework that the proportions of the design, according to the written directions, are different from the way the model for the reproduction is photographed. I also realized that the way the cutwork is charted won't fit the way the directions indicate that it should. I heaved a sigh, then decided I could make it work and, even better, could make it work without ripping out what I'd already done. As far as I'm concerned, that's a win-win situation. However, you won't see the solution until the very end. I don't like to cut threads until I've finished the rest of a sampler simply because it makes the linen wobbly. My stitches look better if my linen is taut, so I wait to do cutwork until the end.

Today, though, I'm in the mood for color, so I'm going to work on filling in some of the sections in Eve in the Garden of Eden. It's my last day of vacation . . . sigh . . .after the week-end, it's back to work. No more playing in the stash until all hours . . .but since working pays for my habit, I am thrilled to have a job!
Posted by Ann at 9:11 AM