Our EGA chapter is going to have a Christmas in July meeting, talking about several ways to put Christmas ornaments together. To do this, I need to have several Christmas ornaments stitched. I had found a really neat free design online that I wanted to use to show how the same pattern could be finished in several different ways.

I even bookmarked the page.

Which has apparently been removed from the innerwebs.

It appears the designer is no longer designing.

Since I needed to think about how to approach this from another angle, and since stitching always helps my thinking, I picked up the Schwalm piece again and got through this week's lesson. I even figured out what I was doing wrong on the last square of the previous week. 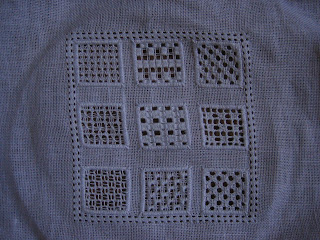 Obviously I did not press before photographing.

I think I've figured out what to do about the program, which is going to require spending some time with JCS ornament issues and pulling out some stitched ornaments already completed. Dearly Beloved is not thrilled by pulling down the ornament boxes at this time of the year. He seems to think once a year is quite enough.

Even Scrooge promised to keep Christmas in his heart year round. When I reminded Dearly Beloved of this, he muttered something that sounded remarkably like "Humbug."