It's been a good mail week!

I've been stalking my mail carrier lately, and not just for the lightbox. I think I've made him a little nervous. I don't imagine he has a lot of large and lovely ladies lurking by their mailboxes on his route with needle in hand and a maniacal gleam in the eye, waiting for stash to appear.

All this arrived in the last few days: 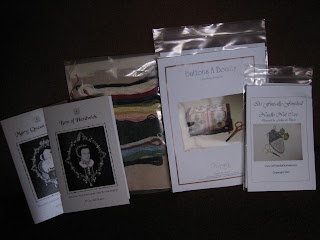 Starting from the left, two booklets from the pen of Gay Ann Rogers' husband Jim. They are brief biographies of Bess of Hardwicke and Mary, Queen of Scots. Both mention the needlework these two women of the Tudor Age are believed to have stitched. However, as far as I'm concerned, the most valuable thing about each booklet is its bibliography with more resources to explore.

Next to that are the silks and the linen for the Elizabeth Flockhart sampler, reproduced by Margriet Hogue of The Essamplaire. I had wanted to take this class at Jeannine's last February but it was cancelled. Luckily for me, Margriet was teaching it for the Lake Michigan Sampler Guild, and I was allowed to "ghost" the class. The colors are luscious and it's all I can do to keep from sewing the linen to the scroll bars and starting.  I want to get Ann Scutt finished before I get involved in any other sampler so I think I'm going to have to take Elizabeth and hide her from myself.

And then there is the new Shining Needle class, Buttons a Bounty from Jackie du Plessis. I believe the first lesson will be posted on Monday, and this is one I'm going to start. That linen will be ironed and prepped before then. (I can only be expected to have a certain amount of will power. Otherwise there might be an explosion.)

And then, there is another small project, Needle Nut Case, also from Jackie.  There were several small kits offered as part of the Acorn Extravaganza and this is one I've hoped to add to my stash for quite awhile. Now I have.

Meanwhile, I have now taken out all my stitches on the sixth square of the Schwalm sampler for the second time. As it has misbehaved so badly, it is in time out for a day or so. I think I may put a stitch or two into Ann Scutt tonight, then plan to put the lid for the casket etui together tomorrow in between jaunts with Baby Girl, who is due in tonight.
Posted by Ann at 3:30 PM