I have spent the day setting cobblestones in the walkway in Tribute's scene. 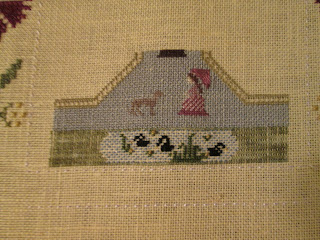 It might have been easier if Milady and her hound had moved out of the way, but they were not interested in going elsewhere while I labored to finish their path.
I had hoped to plant the garden that sits behind the fences on each side of the path so I could start building her fine Georgian house tomorrow, but it was not to be.
I love the delicacy and detail that working over-one gives a design, but OMG, it takes for-bloody-ever to stitch! I am getting closer, though, to have this piece of the project completed, and I think that it's the most labor-intensive part.
Anyway, on to the garden tomorrow--and maybe a little construction on the house.
Posted by Ann at 8:05 PM