I've said it before, and I'll say it again. I am not making plans.

And, of course, I had planned to finish the flowers on this part of Rebecah French today. I didn't. I got about half of them done: 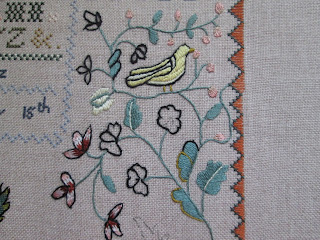 And that is because my sleep was interrupted last night, not once, but twice.

I'm going to be a cranky old lady, so if you're here for stitching, you can stop reading right now.

There is a young man in our neighborhood who is admirable in many, many ways--good student, hard worker--and his goal has been to save up enough money to buy a car he could drive during his senior year in high school. He has worked very hard to meet this goal, which was made even harder with Covid cutting off so many job opportunities for so long. This meant that he worked two jobs this summer.

And he bought a car. Actually, what he bought was a motorized, rolling vehicle to carry a major stereo system, with emphasis on bass speakers. And this thing rolled into the neighborhood at midnight last night. Dearly Beloved, who had taken his hearing aids out, thought it was thunder since the windows were rattling and he could feel the vibrations.

And then, the kid rolled out this morning at 6:30 to go to one of his jobs (gotta buy gas, you know), and apparently, he needed to wake himself up so he cranked up the stereo again. And this was quite the shock to the system on a quiet Sunday morning.

His parents have come to every door and apologized--it seems the stereo was a surprise to them as well--and we have been informed that this will not happen again. Dad mentioned that the title is in Dad's name, as is the insurance, so he has leverage.

Considering the bags under his eyes, we believe that Dad will carry through.