We have a new computer. There is a learning curve, since it has some features the previous one didn't, and is missing some features from the old computer we really liked. There will be trips to the Genius Bar in our future. It appears that we will have to purchase additional stuff to do what we could do on the old machine. And I have to find the info that tells me how to link the printer to the new computer.

So I'm still using the old computer temporarily and hoping it doesn't up and die completely before I get all this sorted out. And that's one headache.

The good thing is that I am working on the last dark plum piece of linen for Tribute. 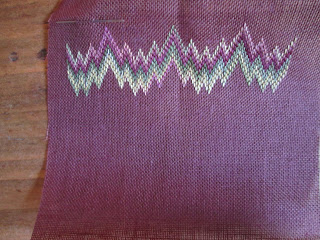 The flash lightens the color of the linen, which is much darker than it appears. The plum shades in the thread are almost the exact same shade as the linen, and that makes it a wee bit difficult to see. That's another headache.

I have to do a total of six repeats of the colors for this piece, and I'm on the second one at the moment. I'm beginning to think it might be a good idea to do one repeat a day and take just a little longer to finish the stitching for this than to try to zoom through. That might alleviate another headache.

And I just had to change needles on this project for the third time. Apparently my body chemistry is quite acidic, and I take the finish off needles. I can generally get through maybe one-and-a-half projects on a needle, but this summer, I have been killing them dead before I get to the halfway point. Good thing I'm going to be at Sassy Jack's next week and can replenish the supply.

Because being a stitcher without a needle would be real headache!