Close but no Cigar

I am sooooo close to having the front panel of Tribute stitched . . . but I'm not there yet. 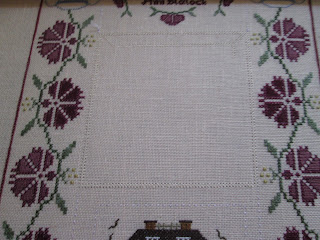 This big open space in the middle will be cut away so the panels that create a box can be inserted--don't ask me exactly how, that's why I'm auditing this class at Sassy Jacks in July. To get ready for this step in the assembly, you have to work four-sided stitch, then nun stitch all the way around--and you do those stitches after you've added a layer of iron-on interfacing to the back.

I wondered about putting the interfacing on before stitching. Then I figured that it would show through the openings caused when you put tension on the four-sided and nun stitches--and that could perhaps mean that when you add that interfacing, you could potentially glue your piece to the ironing board. That would be a bad thing.

It ain't easy to stitch through interfacing with a tapestry needle. Actually, it took way more effort than I wanted to expend, so I pulled out a sharp and I'm working faster and easier than I was.

I am SO ready to move to another part of the project!

Actually, I started thinking that monogamy in projects is vastly overrated, and maybe I should alternate this with something else. I started going through the other projects in the pile by the wing chair, and realized that I had also hit a point in those projects that made we want to put them down for a bit.

And that led to the realization that the most enjoyable parts of any project are the first stitches and the last stitches, and sometimes you just have to slog through the middle--when all the freshness is gone and the end seems far, far away.

So, I'm going to continue to slog. I'm also going to make a valiant attempt to finish the nun stitch on this piece before I go to bed tonight.