On the First of December

I had planned to show you at least one completed Christmas ornament.

Well, we all know what happens with me and plans.

We had a small Domestic Disaster.

As I was coming downstairs this morning, I glanced into the living room and thought, hmmmm, that tree doesn't look exactly right. However, it was raining cats and dogs and I wanted to get the Sunday newspaper in before it completely dissolved.  I got back inside with the newspaper, spread it out over several surfaces in the kitchen so it could dry enough to read, and wandered back into the living room to see what was wrong with the tree.

What was wrong with the tree is that it was leaning at a 45 degree angle. It would have been completely on the floor had it not run into the arm of the couch.

So, it was off with the ornaments so Dearly Beloved could figure out why it was leaning. Turns out he hadn't quite pushed the stem far enough into the stand, and I spend my stitching time today redecorating.

Let me tell you, putting the ornaments on for the second time during the same week isn't quite as much fun as it was the first time. 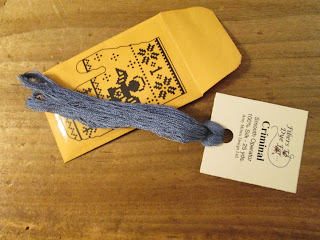 It is a beautiful skein of Amy's hand-dyed line of threads in a shade of blue from my favorite family of blues.  And now it's very hard to avoid ripping into all the other little envelopes to see what else is there.

I will try to exercise some self-restraint.
Posted by Ann at 4:13 PM