Over the River and Through the Woods

To Williamsburg we went.

We went for the newly revamped Christmas in Williamsburg. As usual, I was planning to blog every day while I was there. Then I realized I had left the camera at home about ten miles into Virginia--which was too far to turn back.

Not a problem, said I. I have my phone and can take pictures with it.

And I did. But then I could not get my Google phone and my Apple laptop to talk to each other. After a very frustrating and exasperating OK Boomer episode, I decided I would write when I got home, but when I got home, I got swept back into work and getting ready for Christmas--and this is the first time I've made time to sit down and do something about poor, neglected blog. 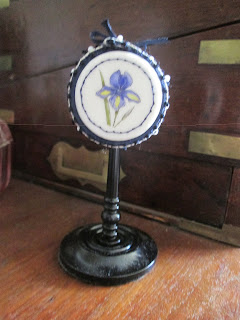 Isn't it divine? And it will go with the Necessarie de Voyage project that I took for the next three mornings. I have not taken a picture of that yet but I do have a finished handle for the delicate, dainty basket that I will be making. And the handle for that basket was done in class after I mis-heard the directions and cut the wrong ribbon. Jackie came to my rescue with an additional length, so I was able to do that part in class.  Apparently my job in life is to do things wrong so other people will know they shouldn't do them the way I did . . .

However, I don't usually get much done in class, so this was a major accomplishment!

It was even more fun because I was able to sit with a group of my stitching buddies, always a happy thing.

Williamsburg was its usual lovely self all decked out for the season. We did get a chance to stroll the Historic District one afternoon after a wander through the Art Museums, my favorite part of any trip to W'burg. I can't wait until the construction on the expanded museum is complete, and all those lovely things that have been in storage for lack of exhibit space come out again.

All too soon, it was time to drive home and fall back into the routine. I have been keeping up with the Zen stitching and got the cording made and sewn around the four Barbara Jackson ornaments that have been stitched for years. They're going on the tree today: 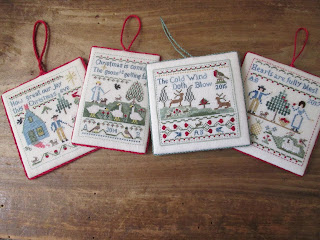 And last night I started this year's ornament: 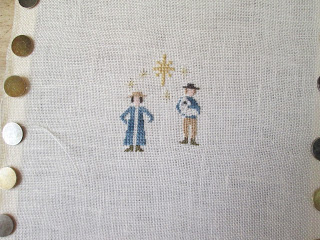 I've stitched the last of the bits for Tsubaki, so it's in the finishing pile.  The kitchen table has been transformed from Finishing Central to Cooky Baking Central, so Tsubaki will have to wait until I get the final batch baked and cooled--at least that's my current excuse to avoid putting something together.

And I'm still opening my daily goodies from Amy Mitten--but this has rambled on long enough. And there is still decking of the halls to do.

I really needed another week between Thanksgiving and Christmas this year!
Posted by Ann at 9:57 AM