OK--earlier in the week, my stitching mojo vanished in a puff of smoke. Gone. Move along, nothing to see here.

I tried. I sat with the threaded needle in my hand for about an hour one night while watching reruns of Big Bang Theory. Not one stitch was taken, and they were episodes I had seen multiple times before.

And here I was on my way to Salty Yarns to take a class from Betsy Morgan, and it's a project that I've wanted since it appeared on her blog. To say that I was afraid I would be a bump on a log in class is an understatement.

So I travelled to Baby Girl's last night and we got up bright and early to make the trek to Maryland from North Carolina.

And if there was ever a trip that would make a person reconsider taking a class, this was that trip.

But then we arrived at the Lankford and Salty Yarns, and we have been welcomed with their usual gracious hospitality, and once again, Sara provided the absolute best goodie basket. 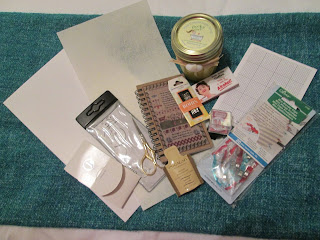 It is all housed in this perfect box: 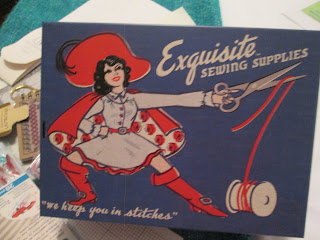 And I'm feeling the urge to stitch again.

But if you think I'm even going to attempt that tonight, after 11 hours on the road--forgive me, but are you insane?