Last night I had determined I was going to work on Frances Burwell this week-end. I even pulled her out of her pillowcase and did a few more letters on the second row. 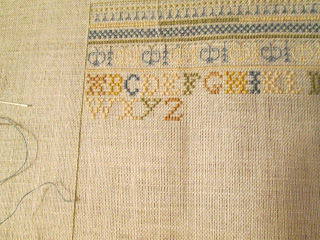 But then I wandered into the stash room to look for something and discovered what had made the thump in the night.

Background--a week or so ago, Dearly Beloved and I had just gone to bed and turned out the lights when we heard a thump. It wasn't a loud thump, but it was a thump. So Dearly Beloved hauled himself out of bed and went on a tour of inspection to see what had happened and if we were being invaded. He found nothing. We decided it must have been something outside and went to sleep.

But when I opened the door to the stash room (for obvious reasons, I keep it shut) I found that there had either been a Disturbance in the Force or a small earthquake--or something had just shifted for some unknown reason--and one of my storage tubs had tumbled to the floor.  The lid had popped off and the contents were strewn across the floor.

You can't leave needlework strewn across the floor--or I can't--so I started picking up and sorting and of course, I found treasures. And now I want to work on every single one of them. 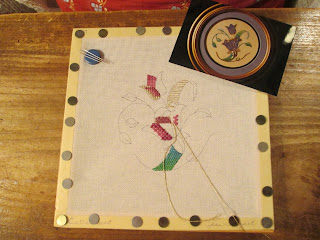 Here's a silk and metal thread design from the much missed Jean Taggart--probably started twenty years ago. 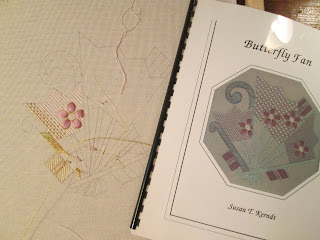 And another silk and metal thread design, this one from Sue Kerndt. 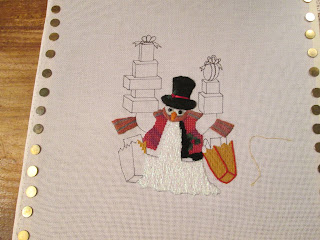 And this adorable snowman from Jody Adams.

When I took the classes, I was doing a lot of pilot stitching with deadlines all over the place, and I didn't get back to them after the seminars were over. But now that I've found them again, I want to stitch them.

I'm a little concerned, though. I think my stitching was better then than it is now so I need to up my game to go back to these.

Anyway, while I was trying to decide which one to tackle first, the mail carrier delivered this to my door. 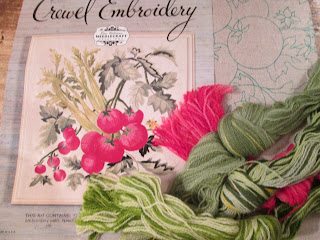 I found this on the Bay of Evil. I've wanted this piece for years and years and years. The grandmother of one of my best friends had this stitched and framed on her kitchen wall--and by the time I saw it, the kit had been discontinued. I don't know why it appealed to me so, but I've been searching for it for over forty years--and there it was at a reasonable price, so I grabbed it.

Which just goes to show, if I'm meant to have a needlework project, somehow it will eventually come my way.

The only problem is that I'm back to where I was before. What am I going to work on first?
Posted by Ann at 4:04 PM