After a long day of stitching, all the leaves and vines on the back of the second band on the second panel of the Virgin Queen are done.

The happy dance has been celebrated. 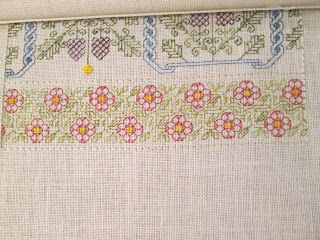 I think it looks very William Morris-ish, and I did finally figure out a pattern I could follow, so it wasn't quite as painful as I feared.

And I decided which thread winder designs I wanted to use and got those stitched. 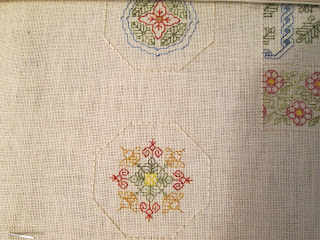 I went with darker values than the original designs on both of these because I have left my usual rut and gone wild on the lining fabric.

Please keep in mind that going wild is relative.

We had a choice among a yellow-green, blue (my usual option), and a rusty, cinnamon-y red. The red made me think of Elizabeth I more than the other two, so I threw caution to the winds and opted for it. Actually, I think I'm going to like it a lot.

I have already outlined the last panel and the two halves of the scissors fob, so I'm going to thread up my needle again and see what i can accomplish before bedtime.
Posted by Ann at 2:51 PM