I came home yesterday after leaving Salty Yarns on Monday and spending Monday night at Baby Girl's home. Both legs of the trip were much, much easier than the trip up on Saturday--the longest delay we had was the fifteen-minute wait for a table at The Carrot Tree in Williamsburg.

What I was going to do was unpack, throw some laundry in the washer, catch up on the newspapers. write a few entries in my journal since I forgot to take it with me, blog about the class and the trip, and maybe stitch for a little bit. I also fully planned to go to bed early to make up for not sleeping as much as I usually do.

I unpacked and threw a load in the washer.

The sun was shining and I had daylight for stitching, so I thought I would just stitch for a little bit and catch up on the newspapers, journal, and write a blog when I started losing the sun in my corner. And I could still get to bed at a reasonable hour, since it was back to work today.

And that was it. There was Chinese for dinner. There were a few loads shifted from washer to dryer. A couple of them even were folded up, although they're still sitting on the kitchen table.

And I got this much done before I forced myself to go to bed. Later than usual. 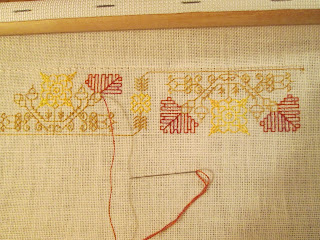 I had to go back to work today and I had to be a responsible adult tonight and make grocery lists and do more laundry and pay a couple of bills and do all those deadly dull and boring things.

I'd much rather be stitching.