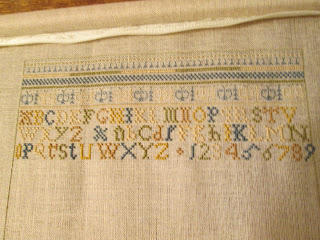 It is all stitched reversibly. The second alphabet is worked in the reversible cross that results in a four-sided stitch on the back.  I could have stitched half a dozen alphabets in the time it takes to stitch two reversibly.

So, you might ask, as a friend did--if you're not going to frame the sampler so the backside can be seen, why do it?

Well, for one thing, when I'm working a reproduction, it just doesn't occur to me to stitch it other than the way the original embroiderer worked.

And that includes strange things, like the green lines running from top to bottom along each side. Sometimes the sampler runs into and over those lines: 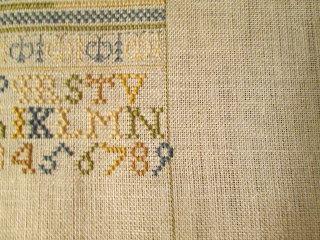 It all adds to the charm--at least, that's how I look at it.

The other thing is that, judging from the brain cramps that have occurred as I've worked, new neural pathways are being created inside my head. At least, that's the hope.  I'd hate to have the brain cramps without some benefit from them.