As we had snow, our plans were, once again, somewhat topsy-turvy--but our fearless leaders, who went to great trouble to plan enjoyable additions to the retreat, made it all work. I'm not sure how much they actually were able to enjoy themselves, but they did a tremendous job to make sure we were able to do all that was promised--and in some cases, like the trip to the textile storage area, provided so much more!

Friday's excursion was to Agecroft House in Richmond, VA. Agecroft started its life in England during the Tudor period, and was home to landed gentry for hundreds of years. However, the land under it was mined for coal and the foundations of the house were in danger. An American businessman heard it was up for auction, bought it, had it disassembled, and shipped it to the US, where it was reconstructed on the banks of the James River. He left a trust so that it could be turned into a museum, and, after his wife decided to move after almost forty years of residence in the home, this happened.

The curators scoured the UK and the world for furnishings and accessories that would have been found during the Tudor and Jacobean periods.

And they found them and brought them back--including embroideries. Once again, we were not allowed to photograph the pieces, but if you have an interest in 17th century needlework, there are some exquisite items on display. We were also lucky enough to see some pieces brought from storage.  Again, we could not touch, but there was drool.

Yesterday we had a chance to take some special classes. One of our participants led us in an introduction to bobbin lace.  I flunked bobbin lace. I learn much better if I have printed words and diagrams that I can study and digest, rather than oral instruction.

I was trying to explain what we did to Baby Girl, who came to take the second class which involved wiring our needlework for sound, light, and motion. She looked at what I had done in the bobbin lace class, put all of it into the tote bag I brought to carry the materials home, and kindly informed me that she would figure it out and either do it or show me what to do.

There are times when I wonder who is the parent and who is the child.

And I did not take the wiring class. I knew my limitations before going into that one.

I stitched instead.  And here is what I managed to get done between yesterday afternoon and today: 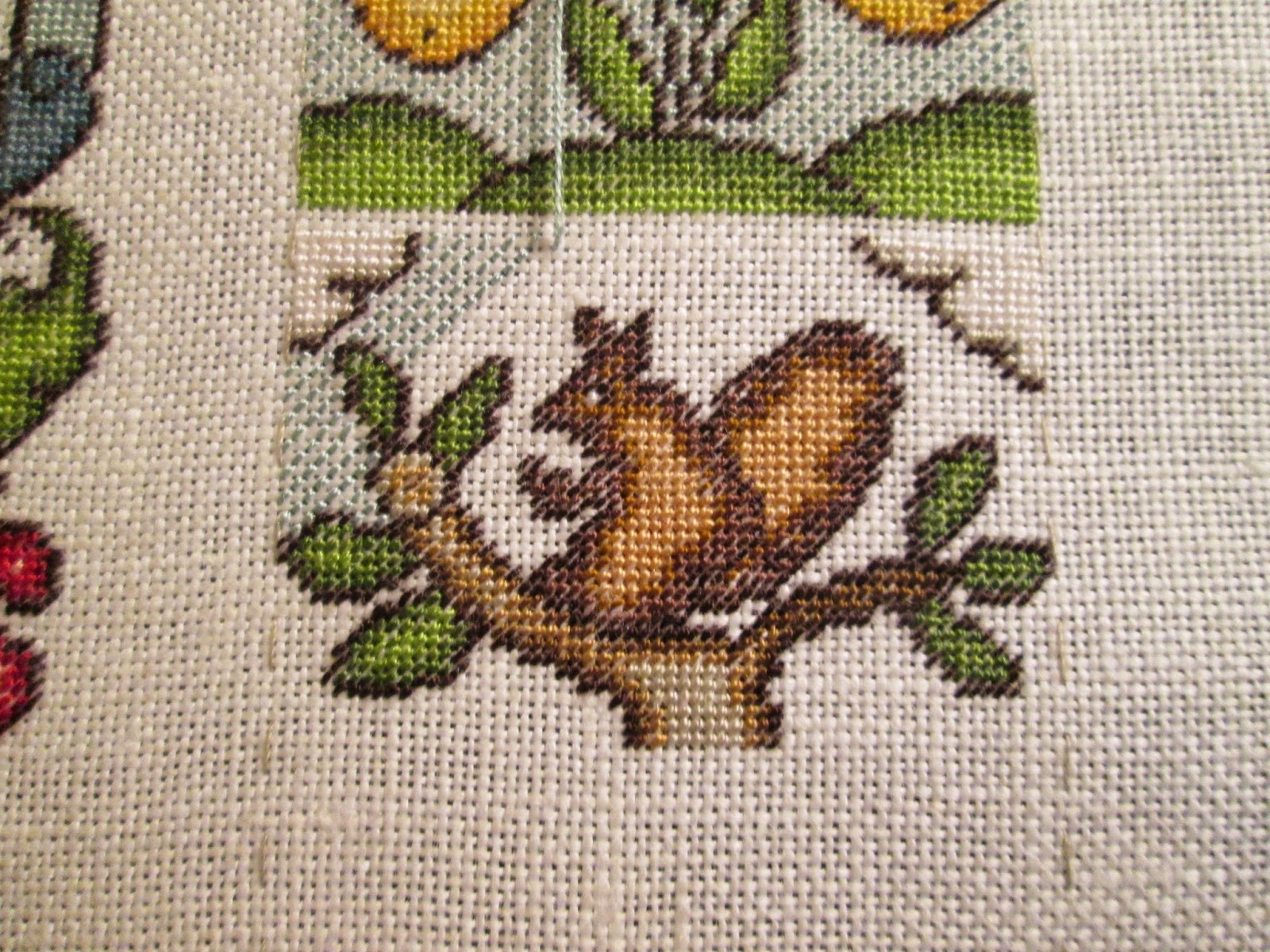 It's a critter. We had some discussion about the type. The tail is definitely beaver-like, but the body looks more squirrel-like. The fact that it is sitting in a tree would tend to identify it as a squirrel rather than a beaver since beavers are known for gnawing trees down rather than sitting atop them. I'm just thrilled that with several more hours for the background, I'll have another motif finished.

Other retreaters were working on samplers, both repro and contemporary, men's pocketbooks, casket toys, bits and pieces from the Cabinet of Curiosities class, quilt blocks, smalls of various types and styles, and I heard mention of beading. It was absolutely inspirational to see what was going on around me in the stitching room.

And I wish it didn't have to end, but we are heading home at o'dark-thirty in the morning, if Dearly Beloved has his way.