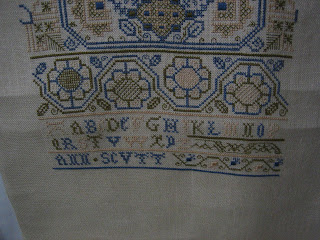 Here is her last band.

And here she is, top and bottom. (I could not entice Dearly Beloved into holding this one up for photographic purposes or any other reason. He said his legs would stick out and it would look ridiculous. I think he has cute legs but apparently that is insufficient.) 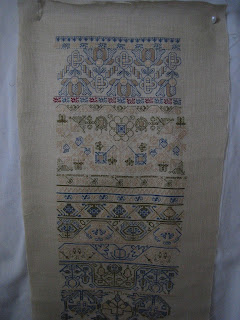 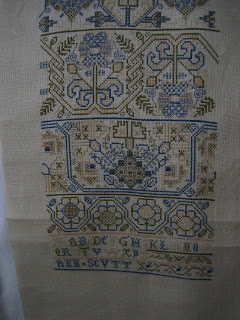 I stitched this as part of Nicola's Scarlet Letter Year. I'm thinking of doing another Scarlet Letter repro, but it's going to be a small project. I'm not sure what it will be, but it will be smaller than Ann.

Meanwhile, I'm in the dithering stage of my stitching journey. I've noticed a pattern that occurs when I finish a project. Instead of planning what I want to work on when I finish a project before I finish that project, I start buzzing from one idea to another like a hyperactive bumblebee in a field of wildflowers. Then I spend several weeks stitching on this, that, or the other until I become obsessed with something and focus on it until it's done. Then we start the whole process again.

With this three-day week-end, I hate to waste valuable stitching time dithering, but having spent a good bit of the morning doing just that, I can't see a way around it. I may just close my eyes,  grab something out of the basket, and start stitching.
Posted by Ann at 9:17 AM