Although it's hard to see, all the little sprigs and twigs are done.  Now it's on to the leaves . . . 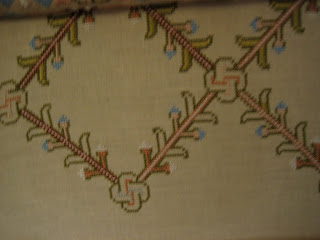 I had thought I would have more done by this time tonight. Of course, I had to remove a few stitches since I misread a symbol and stitched in the wrong color. For some reason, it can take as long to take stitches out as it can to stitch them the first time. And then it seems to take more time to re-stitch than it took to stitch at first.

And I am not staying up much longer.

This morning was my idea of perfect sleeping weather. It was pouring rain outside. Inside the bedroom was cool, almost chilly, but I had a nice warm nest under my layers of blankets.  Too bad the Nyquil wore off before the alarm went off. Since it was a choice between sleeping and breathing, I opted for breathing. So I think I'm going to bed early instead of stitching.  I'd rather stitch, but it is not a good thing to operate a very sharp, pointy piece of metal under the influence of cold meds. I've added enough DNA to this project already!
Posted by Ann at 5:55 PM