There has been some discussion in our house about the type of animal this thing is. 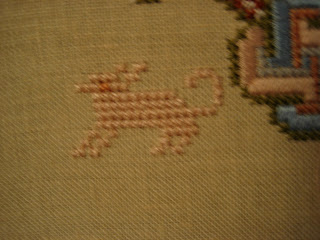 First impression said it was a rabbit, but the tail is all wrong--but the ears look like a bunny and hares have long legs.

The tail led Dearly Beloved to surmise it could be a long-legged rat.

I suggested it was a dog.

Dearly Beloved said it was obviously a rat-dog.

Conclusion:  it's a Critter. We have wondered if little Martha got into the wine before stitching it.

I have two more of them to stitch. None of them is any more identifiable than the others. (And, yes, I know the stitches are going every which way. It is stitched in a reversible manner, a la 17th century.)
Posted by Ann at 6:18 PM