(This will eventually get around to a stitching story.)

When I was a child, I had somewhere around twenty-plus great-aunts.  They were all, bless their hearts, characters--but that is a story for another time.

One of the major characters was Aunt Polly.  I could not say "Polly" when I was learning to talk.  I called her "Poddy Pod" which was later shortened to "Pod," and that is the name she became known as for the last twenty or so years of her life.  I'm not sure she ever forgave me for that.

Anyway, Pod was supposed to die when she was sixteen.  She lingered for another seventy years, enjoying ill health.  She never married, therefore never had children, but this, of course, meant that she was an authority on relationships and child-rearing methods.  She was delighted to share her observations on behavior and her recommendations for everything from keeping a husband to teaching children proper manners and respect.

She was not, however, a reader.  She read her Bible, she glanced at the newspaper, she may have flipped through a magazine or two while waiting for a doctor's appointment (remember, she enjoyed ill health).

On the other hand, the minute I deciphered, "Run, Spot, run," I became a voracious and constant reader (which hasn't changed, as the groaning bookshelves will attest).  I constantly had my nose in a book, or fastened to "Highlights" or attached to the back of the cereal box at breakfast.  This concerned Pod, particularly when I was diagnosed as near-sighted and prescribed glasses in third grade.  Whenever she saw me reading, especially when she thought I had insufficient light, she would screech, "You'll ruin your eyes!!"

And then, yesterday, I was diligently working on my Dresden Lace correspondence course, which will be due this month. Yesterday was a beautiful day, bright and shiny, so loads of natural light to make it easier to see 55 count linen.  But, after awhile, I realized I was focusing so intently I was forgetting to blink.  I also realized that I had been focused so intently that hours had passed, that I was so stiff I could barely totter up from my chair, and that no oxygen was reaching my brain.

It was time to take a lap around the neighborhood, get the muscles moving, get some oxygen to the brain and other parts that had gone numb.

Things seemed a bit blurry as I set off--and then I realized that I had not taken the time to look up and refocus.  For Lord knows how long.  And I realized things weren't getting any clearer.

Merciful Heavens!  Could Pod have been right?  Could you ruin your eyes by using them too much?

Anyway, after a few more steps, the world became clearer and I didn't go blind.

And this is what I was working on: 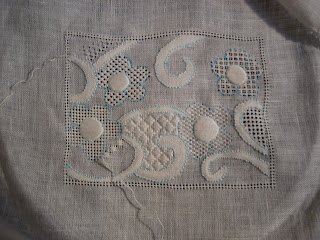 It's only about the size of an index card.  The entire thing will be stitched. The whole background will be four-sided stitch.

You may notice some threads wandering off to the sides. This is the part I pulled out when I realized I could not see 55 count linen under artificial light, even artificial Dazor or Ott Light light.  Alas, thwarted by working for a living--let's hope the next couple of week-ends have sunshine and not clouds so I can finish before the deadline--or before I ruin my eyes.
Posted by Ann at 4:25 PM