Somehow it got to be Thursday and very little stitching has happened around here.

I did work on Rebecah French over the long week-end but of course, didn't get as far as I had hoped to get.

Then I was distracted by this: 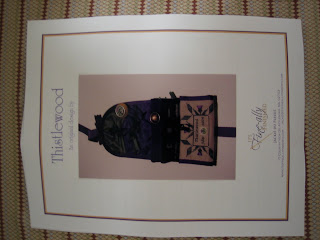 (And I have tried to rotate the silly thing and it won't rotate and save.)

Anyway, this is the newest class I'm taking through Shining Needle Society, Thistlewood from Jackie duPlessis.  Naturally, as soon as I walked in the door from work on Tuesday and found it waiting for me, I had to fondle the threads and read the directions and come very close to threading a needle.  I was strong and resisted the siren call, but it was hard.

And then I was diverted by this: 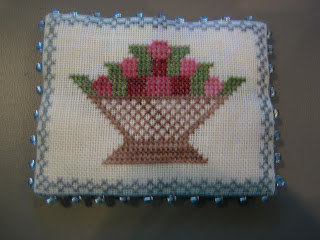 This was the program for the first meeting of the year of the Carolina Sampler Guild, which occurred last night.  The motif is inspired by one found on the sampler of Mary Locke, a student at Salem Academy.  Our programs for this year will be a series of smalls, all of them with motifs from samplers from the Carolinas.  In addition to the pinkeep design based on her sampler, we heard a bit about Salem, the emphasis the Moravians placed on education for everyone (including little girls in a time when the formal education of the female of the species was considered unimportant and unnecessary), and the life of Mary Locke herself.  Her guardians felt it important for her to have education in embroidery and paid an additional two dollars a year for the privilege.

Mary's sampler, stitched while she attended Salem Academy, was reproduced in an issue of SANQ about ten years ago.

So, of course, when I arrived home from the meeting, I immediately had to go stash diving for threads and fabric and stayed up way too late. . .which means I am now very sleepy and a little concerned about counting accurately.