Last week was a very good week for surprises arriving in the mail.

(They were surprises only in that I didn't know exactly when they would arrive--but, hey, I'll take goodies any time I can get them.) 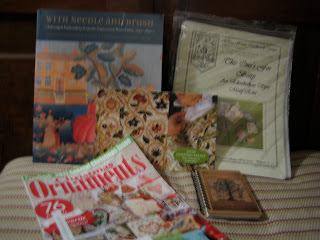 First up: With Needle and Brush, Schoolgirl Embroidery from the Connecticut River Valley, 1740-1840.

This is the catalog from the exhibit of the same name held at the Florence Griswold Museum.  It is a lovely book which includes detailed descriptions of the needlework and information about the stitchers.  I could wish that the photographs of the pieces were a little larger, but given the expenses of printing and the current economic situation facing virtually every museum, I can certainly understand the constraints.

Then, The Ornament Issue.  I have found a good many ornaments that I would love to have on my tree.

Ok, full disclosure:  I have every single copy of The Ornament Issue, from the beginning.  I have multiple copies of several since obviously I liked them so much I had to have another one (has nothing to do with forgetting I already had a copy).  I have yet to stitch a single, solitary ornament from any of them.  I say to myself when they arrive, "Wouldn't it be lovely to stitch an ornament a month from this to add to the tree?"  Then, in January, when I'm still vacuuming up needles from the tree, I am not inclined. I should probably stitch ornaments in July and August.

The little notebook was part of the shipment which included the last installment of Ann Wheatley--if you signed up for all parts, there were goodies to be had.  It is a very handy size and already has notes in it.  As far as Ann Wheatley . . .well . . .I'm still slogging through the verse from Lesson Two.  SO many letters  . . .

There is the kit for "This One's for Betty," a set of smalls designed by Betsy Morgan.  I'm a member of the Swan Sampler Guild, which treats its away members very well and makes sure we can benefit from the teachers they bring in. (This is another one of those organizations which gets me into trouble.)  I am looking forward to stitching this but I am being strong and not giving into temptation.  Yet.

And finally, the catalog for the exhibit at Winterthur arrived.  If you contributed in any way to the funding for the exhibit, you received a copy.  Dearly Beloved and I will be heading to Delaware in a few short weeks--I'm going to the symposium and he is going to tour Winterthur while I'm in lectures and classes.  The catalog has only whetted my appetite for seeing the exhibit.

It's been almost like Christmas around here!
Posted by Ann at 3:05 PM